Swimming is the common denominator in the lives of Dani Grady and Nancy Blair, who are childhood friends and a professional synchronized swimming duo. The two used to just practice their routines in pools to get ready for upcoming competitions, but once COVID hit and pools closed, they began to swim daily, sometimes in the bay and oftentimes in the ocean.

Their brightly colored teal mermaid SlipIns dive skins, coupled with their outgoing demeanor and swagger were so infectious that they began to attract attention from younger gals who wanted to join them. So, SharkBait Mamas was born and has now grown to a dozen ladies ranging in age from 21 to 82. Yes, their name came from the increased shark activity in the water, but they were not going to let anything stop them.

The unwitting founders, Dani and Nancy, grew up together here in Coronado. Both from Navy families, Dani was born here, and Nancy moved here in fourth grade. They knew each other in school, but were not close friends until they reconnected 14 years ago and formed their synchronized swim team. They compete locally and nationally several times a year, and they even swam the English Channel in an all-woman relay in August 2009 as one of the oldest teams to complete the swim.

Nancy has taught swimming for 45 years to Coronodans of all ages and abilities, from novices to Navy SEALs. Dani is the Director of Outreach and Community Relations at the UCSD Kavli Institute for Brain and Mind, and a long-time breast cancer survivor and patient advocate. She is considered the drill sergeant of the SharkBait Mamas and choreographs the routines. The two have always been about style and fun and that’s why the SharkBait Mamas complete their teal mermaid ensemble with Marilyn Monroe inspired blonde wigs, toy plastic sharks, floral swim caps and goggles.

There’s no doubt the world’s a brighter place when this group meets to perform every Sunday at 10 am at The Del beach. “Our goal is to bring joy to those around us, especially during these stressful times,” comments Nancy. They prefer swimming in the ocean because saltwater offers greater buoyancy.

You definitely can’t miss them as they start their “Monroe Show” on the walkway between Windsor Lawn and Del Beach. Passersby always stop to watch and take photos. They recruit a President James Monroe impersonator to “initiate the era of good feeling.” You can’t help but grin as Dani revs up the crowd with Marilyn witticisms like “Never marry for money, you can borrow cheaper,” and “It’s better to be absolutely ridiculous than absolutely boring.” Then the colorful, dynamic group makes a grand exit down the sandy beach into the water where they perform their routine.

Members are from many different walks of life and include Lydia Grypma and her sister Jane Pederson, high school friends, Jenn Ludwig, Katie Walkington, Savannah Remington, and sister Brianna Barnes and her baby mascot Falco, originally from Woodstock, IL, who were walking by and just knew they had to join the group, Amy Bozek, Sabrina Simeroth, and the oldest Judy Collins, and the youngest Hannah Brewer. They all tell themselves that the water is refreshing, not cold, as they take the plunge. “Our SlipIns suits keep the cool out and look amazing,” laughs Dani. This year, they performed for many months at the Ferry Landing and even did several shows at the Coronado Yacht Club for the 4th of July festivities.

Dani and Nancy are also part of the San Diego Sea Stars Synchro Inc., a non-profit group that helps develop coaches and young athletes in artistic swimming. Dani and Nancy are Masters swimmers and frequently join in alongside kids, from 5 to 12, always working on skills and routines for the next meet or recital. For a decade, they have also helped with fundraising efforts for the swimmers who don’t always have the money to join. Due to special challenges of the pandemic, they have stepped up fundraising, now through the SharkBait Mamas activities and the SD Sea Stars, donation link  – sandiegosynchro.org.  They are currently organizing a fundraising event called “SharkBait Mama Week,” where they will be performing shows at 21 waterfront locations, including many participating restaurants, throughout the county.

It takes some serious skills to perform upside down in unison in the ocean water. Did you know that synchronized swimming became an Olympic sport in 1984 and was rebranded artistic swimming in March 2020? I highly recommend checking out their weekly Sunday show at The Del. I promise it will bring a smile to your face and joy to your heart. You can also check out @SharkBaitMamas on Instagram to get a glimpse of the enthusiasm these ladies adore sharing with the world. 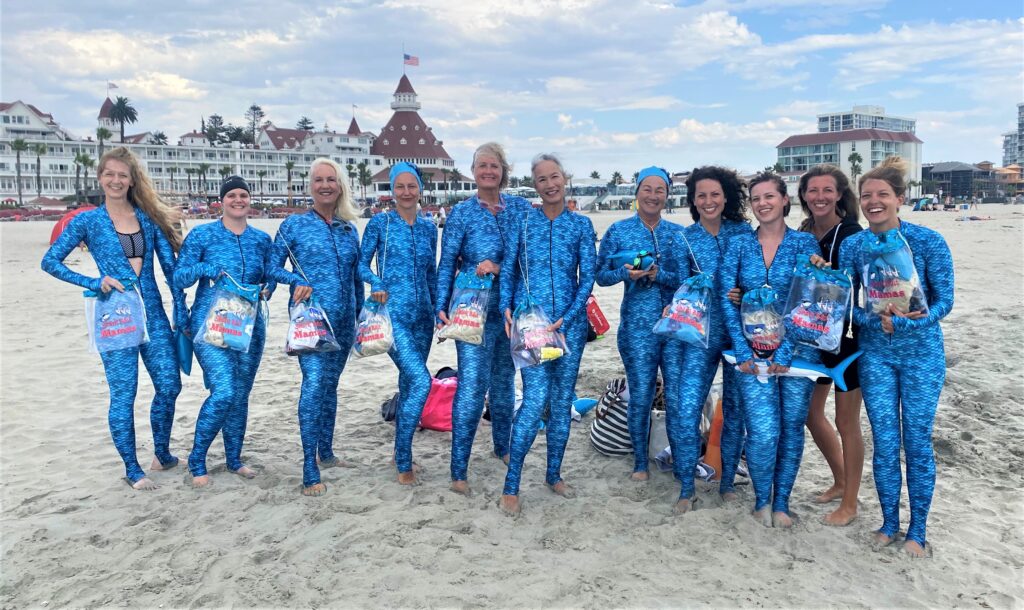