Well football fans, the season is just about upon us. With the Islanders season opener vs. Sultans of Santana High School this Friday, August 20 (7:00pm at home), I felt it was best to get Islanders Head Coach Kurt Hines thoughts and expectations about the upcoming 2021 season. “From just our first few weeks of workouts, you can tell just how motivated this team is,” said Hines. “We know in a new league we’re going to be challenged but it’s one we’re ready to tackle head-on.”

The second year starter will look to build off a successful freshman year that saw him go 3-2 as a starter. “I think Hudson has looked confident in practice. He’s getting more comfortable with some of the reads and in the huddle. His getting thrown to the wolves in year one and starting as a freshman gave him a ton of experience. I think this year will only help to continue to build his confidence. We want him to go out there and own the offense,” said Hines.

Hines also told me that he will open the playbook up more for Herber in year two, which will hopefully help the Islanders’ offense be more potent.

Along with Herber, the Islanders will also look to their senior bell cow Zane Delcore for offensive production. “Zane is so important to this team,” said Hines “He’s a great runner both inside and outside the tackles. Not only will he be a huge part of this offense, but he’s also key for us at linebacker on the other side of the ball.”

To help Delcore in the running game Hines will also look to players such as Hudson Bartell and Connor Little to help shoulder the load. “Hudson is a great athlete and will give us a good change of pace out of the backfield. The same goes for Connor, he’s another hard runner and someone who can be slippery and hard to tackle in the open field. With all the talent we have in the backfield we may be doing a running back by committee. It’s a position group that we are excited about.”

On the outside, Hines told me they’ll look to Finley Alexander outside and Graham Bower in the slot to make plays for Coronado. “We’re extremely excited to have Alexander back for the ‘21 season. We think he can give us a consistent threat and playmaker outside the numbers. In the slot, we like what we’ve seen from Bower. He’s not a big kid, but he’s tough and explosive. If those two can win one on one match-ups we’ll have a lot of success in the passing game. We also think we will get good production and play from Logan Eastlick.”

When looking at the defensive backfield, it is perhaps the position group that is still mostly up in the air. With the departure of key players, Hines and his staff are still deciding on which players will fill spots on the back end of the defense. But Coach Hines did have a few players he felt confident could fill the void left by some departing seniors. “We’ve been looking at putting ​​Elias Valdivia at the safety position. We like his ability to track the ball in the air and contest 50/50 balls. We also like what Connor Little has and Logan Eastlick showed us at corner.”

In our entire conversation, one of the things Hines was most excited about with this team was the depth it has on both sides of the ball. Not only does it give Hines confidence that if one of the starters goes down that his backup will be just as capable, but it also means he will have fewer players playing both ways; allowing his team to be better rested and have more energy later in games.

When looking at the season schedule as a whole, the Islanders will have to play road warriors this year. Coronado will play a total of six road games this season, which will include a tough stretch that will see the team hit the road for three straight games against El Capitan (09/03), Mar Vista (09/10), and Kearney (09/17). “Really I’m not too worried about the number of road games,” said Hines. “Of course we’d love to play more at home but when you consider just a few years ago we had a season where we played just two home games, so it’s not something we as a team will mind.”

Overall this Islanders team is young and hungry and should be extremely fun to watch this fall. 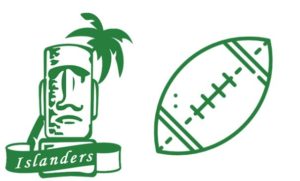