Over the Bridge: Unlikely Hero with Coronado Ties Warms Feet and Hearts of San Diego Homeless

Eleven years ago, Hal Sadler was homeless, sleeping on the streets next to the Four Points Sheraton motel downtown near the Interstate 5 highway ramp. All he had was a cardboard box, a crack pipe and a hustle. Today, he’s sober, standing outside the First Presbyterian Church on 3rd and Date in downtown San Diego, just a few minutes from Coronado. Sadler is behind a white fold-out table, handing out clean, new socks to the homeless.

“Want a pair of socks?” Sadler asks a man with long hair, tattered clothing, a weather-beaten face and a huge shopping cart full of belongings. But, he has no socks; the man is wearing flip flops. The man nods and carefully grabs a pair of black socks with bruised fingers and dirty fingernails.

The I-5 below hums a relentless buzz, dull and loud. The people in the cars are driving to and from places…maybe to work, maybe their homes. The people that wait on the church steps don’t have a home; they lie down on the cold ground in thin hoodies and sweatpants, some in well-worn jeans. Leaves and trash blow in the wind around them. Meek faces peer from behind long hair; their fatigue and hunger are palpable. They are downtrodden, but not without hope; Hal is here, the San Diego Sock Man.

Sadler, 56, a native of Tupelo, Mississippi, comes to this church every Sunday. He says he gives out at least a hundred pairs of socks each week. There is always a line.

“If you had told me back then, when I was on the streets, ‘Hey dude, if you stop [using drugs], then you’d be two blocks away, giving out socks,’ I never would have believed it,” says Sadler.

Sadler wasn’t planning on getting sober back in December of 2010, when a benefactor took him in, allowed him to use his shower, and gave him clean clothes and a new pair of socks. The socks changed his life.

“When I put them on, this warm feeling went up my leg like this,” Sadler gestures to his foot and runs his hand up his calf, explaining the feeling. “And then I put on the other one, and I got the same feeling.”

Sadler pauses for a minute, looking off into space. The chatter from the homeless people intensifies; the food will be brought out soon. But Sadler’s thinking about socks.

“I will never forget how warm I felt,” says Sadler. “And that’s why I’m doing it for these people, to return the exact same dream, and hopefully mimic the love that was shown to me, with just a pair of socks.”

According to experts who work with the homeless, socks are hard to find; donation sites will not accept used socks, no matter how clean.

Sadler — a disabled combat veteran who suffers problems in his legs after 187 parachute jumps — says he found his spiritual home in Coronado. A chance encounter with a taxi cab driver who worked on the island led him to the Coronado Men’s Connection, a group started by the late Ed McVaney to connect church leaders with local men and better their lives through integrity and spiritual growth.

Close friend Steve Hanlon, who helps Sadler hand out socks, recalls meeting him in McVaney’s garage where the men would talk about spirituality, smoke cigars and drink bourbon in beach chairs.

“We’ve always had a connection,” Hanlon says of Sadler, who describes their introduction and mutual love of God as “serendipitous.”

Eventually, Sadler joined Graham Memorial Presbyterian, and counts many of his fellow church-goers as his very best friends.

In February of 2019, Sadler enjoyed some time in the spotlight when a journalist with the San Diego Union-Tribune shared his story in the paper. The story attracted the attention of then-stranger Herman Harring from San Carlos, who noted from the article that Sadler had one glass eye and was suffering from glaucoma in the other eye.

“I read the story, and I said, this guy needs some help,” says Harring. “We’ve been a team ever since.”

Harring now drives down and helps Sadler when he hands out his socks, and Sadler couldn’t be more grateful.

The newspaper article also attracted a sponsor. Sadler used to have to buy his socks on his own; now, Bombas supplies him with brand new socks whenever he needs them.

Josefina Rios, who lives on the streets with her dog Biscuit, gratefully takes a pair of socks from Sadler’s table.

“I’m blessed to get these socks,” she says, pointing to her feet, bare inside of her sandals. “My toe is broken, and I don’t have any socks. It’s worse now, because of the rain.”

Sadler says he’s seen a massive influx of homeless. Whether it’s because of job losses related to COVID-19, or the closing of downtown shelters, he’s not sure. But he relates. 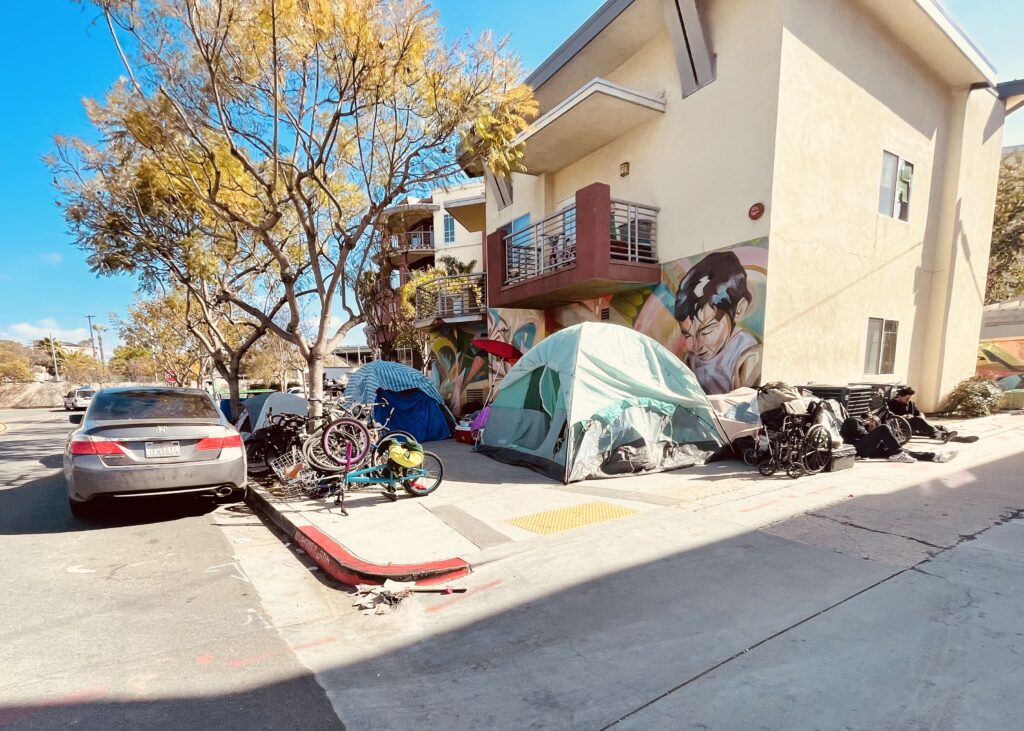 The good news is, according to Sadler, that if God helped him, He could help any one of these people. Sadler says he was the worst one.

Sadler drives this point home with a short prayer that he’s printed out on small squares of paper, which he hands out at his table. To encourage others to memorize it, he creates a challenge: learn the prayer by heart and recite it with no mistakes, and he’ll give you $5.

“This is the first prayer I learned. I learned it in prison,” says Sadler. “It was inside a book called ‘The Power of Positive Thinking.’ I read it because there was nothing else to read. They said the prayer would help. I didn’t believe them.”

But it changed his life.

A woman named Lequita, standing in line for food with her bicycle, studies the prayer for a few minutes and gives Sadler’s challenge a shot. She recites the prayer well, with some errors. Sadler gives her two dollars and she smiles in gratitude, and something else…pride?

Josefina wanders back to the table, clutching her socks. “You know, what I want to do is study law,” she says. “It’s never too late to study. I think I will make it.”

A woman wearing a thread bare, navy blue dress with red eyes and a tired face approaches Sadler’s table. She thanks Sadler for the socks, and asks how she can get in touch with him. She has a very special “millionaire wealth plan” she wants to share.

“You can find me here at this church every Sunday, handing out socks,” he says. “My name is Hal. And I’m the San Diego Sock Man.”

The Coronado School Board met on Tuesday, June 22 at 5pm to address the tortilla-throwing incident at the CIF championship basketball game on June...
Read more
Community News

Luke Serna, a 40-year-old resident of Coronado, has lived on the island since he was six months old. He graduated from Coronado High School...
Read more
Community News