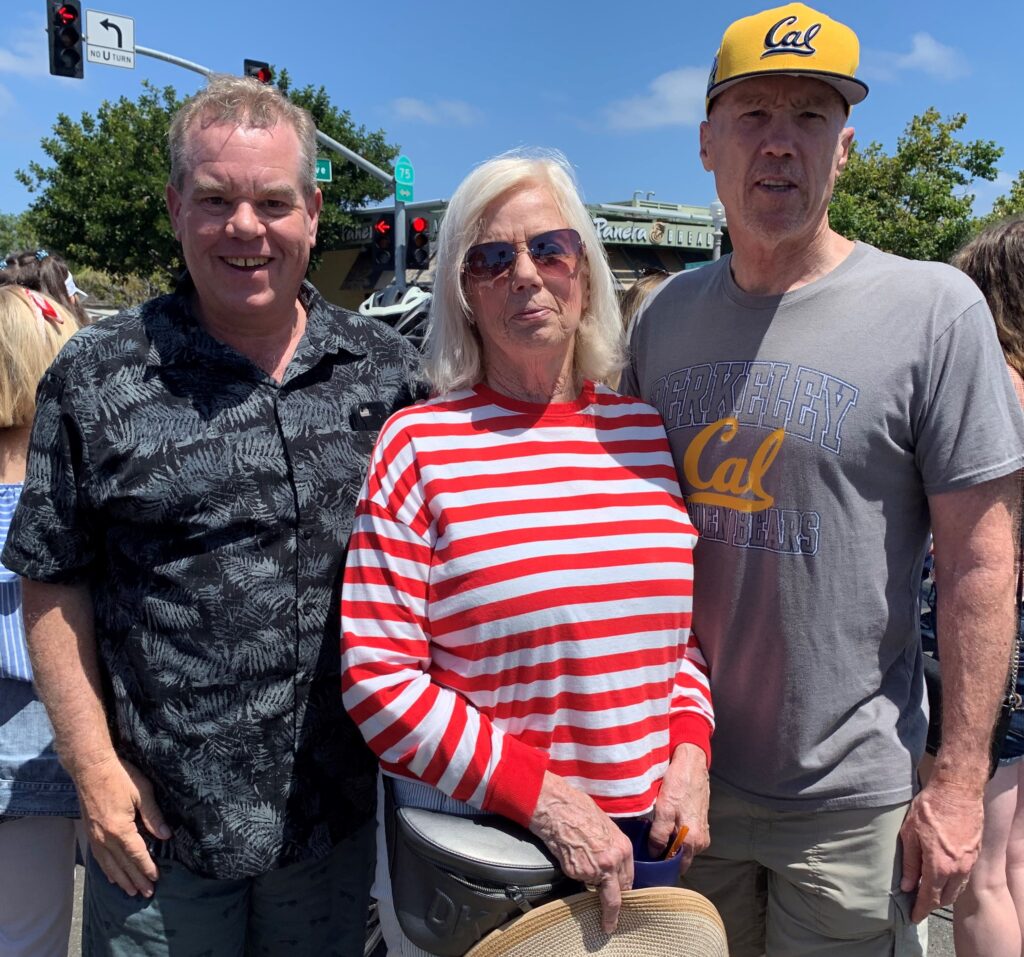 On Wednesday, April 7th, Charlene Leona Rasmussen rode her bike around Coronado Island, got her hair done, went shopping, and spoke with her son Scott before succumbing suddenly to an aortic tear. It was a perfect day until the very end.

Charlene was born in Compton, California, as the only child of Charles “Chuck” McGrory (Pop to his grandsons) and Dixie McGrory (Strayhorn) during World War II while Pop was in the South Pacific. After the war, Pop worked for Union Oil in the Dominguez Hills oil fields and Dixie was a supervisor of phone operators (all women back then) at AT&T.

Charlene was part of the first sophomore-through-senior graduating class at the brand-new Manuel Dominguez High School in 1960. She was an honors student, a student government leader, and a member of the marching band flag team, cultivating a close circle of friends with whom she remained in contact for the rest of her life. She married early in her senior year at Dominguez and gave birth to her first son “Scotty” one week before attending the senior dance with her husband. She managed to juggle all her newfound responsibilities and their disruptions (including separation from her friends) while maintaining a near perfect grade point average, with PE being her only “academic” challenge.

Charlene’s first marriage ended after a few years and she became a single mother until remarrying in 1963. After moving to South Sacramento, she gave birth to Brian in 1965. She often said he was the cutest (tow-headed, blue-eyed) little boy you ever saw.

Charlene became a single mom again in 1969, soon taking a customer service job in the basement of Sears in the new Florin Center Mall. Her boys recall fondly riding their bikes to the mall to visit while she wrapped gifts for customers. She also went back to school, studying government at Sac State in the evenings. It was there that she prepared a report documenting the increasing rate of historic building demolition in Downtown Sacramento. Her research was widely recognized as a catalyst in Sacramento’s historic preservation movement. Based on her undergraduate achievements, and with support from the American Association of University Women (AAUW) scholarship program, Charlene was admitted to the graduate program in Urban and Regional Planning at the University of Sheffield, England. While in Sheffield, she took advantage of the opportunity to tour around England and France with her boys despite tight budgets and time schedules. This included an epic trip to Paris for spring break when Charlene was stuck in a hotel with food poisoning while Scott and Brian toured the city and rode the subways by themselves. Charlene was forever grateful for AAUW’s support of her graduate studies and was pleased to “pay it back” in 2019 with a donation sufficient to fund two scholarships.

Upon returning to Sacramento with her master’s degree, Charlene went to work in the Sacramento County Executive’s office as a budget analyst. She worked with the County until her retirement in 2003. While with the County, she was an officer of the Management Systems Association.

Retirement afforded Charlene the time to spend more time with her parents, who had moved to the Sacramento area to be near her. Pop passed away in 2002 and Dixie lived with Charlene until her death in 2007. She was extremely close with her mother for her entire life and cherished the opportunity to support her in her final years. Charlene was also the only caregiver for Pop’s never-married brother and sister.

Charlene always had fond memories of “So Cal” and the beaches from her childhood. In 2002, she fulfilled her dream of living closer to the coast when she purchased a condo near Ferry Landing in Coronado. She and her mom split time between Sacramento and Coronado until Dixie’s passing. In 2017, Charlene sold her Sacramento home and moved to Coronado Island fulltime.

Charlene’s favorite things were her family, the fresh air of Coronado, doing anything around the beach, riding her bike, shopping, staying active, reading non-fiction, and following current events and the financial markets. She was so proud she had just figured out how to complete a major financial transaction entirely outdoors, done entirely on the cell phone without any paperwork on her end. In addition, Charlene loved fashion, architecture, and travel. She was known to gamble occasionally and loved to go to Las Vegas a couple times per year. She could also be a taskmaster or a “firecracker,” as some called her, but you always knew she was in your corner and would help you as much as she could. She also was a vigorous champion of the underdog. She would cuss on occasion and was not opposed to dropping an occasional f-bomb to keep people’s attention; she was pleased with recent academic research suggesting that effective use of profanity might be a sign of greater intelligence, honesty, and creativity, as well as a way to tolerate pain and avoid conflict. Above all, however, Charlene strongly believed in hard work, honesty, saving money, responsibility, and humility. She was proud of her family and loved California, Sacramento, So Cal, and the United States Government. She cried in January when the Capitol of her beloved country was assaulted.

While Charlene would never tell anyone precisely where she was born, only saying So Cal, and while she might not entirely appreciate the sentiment, her family would like to say, “Compton to Coronado! You Go Girl! We are so damned proud of you! You got us here! With love, thank you for everything you did for us.” Charlene’s younger son Brian adds, “Death ends a life, not a relationship. As you walk with us always and eternally, go well Mom.”

Due to the [email protected]#$%&g Coronavirus (her words), Charlene’s memorial services are up in the air. She will be interred with her mother, next to her father in Rose Hills Whittier Cemetery, along with many of her ancestors.

Should you wish to donate in Charlene’s memory, her favorite charities are Sacramento State University; The University of Sheffield, England; and AAUW Sacramento Branch.