WILDCOAST will host the 16th Annual Dempsey Holder Ocean Festival and Surf Contest on September 28 from 7am to 3pm at the Imperial Beach Pier. This family-friendly event is south San Diego County’s largest and longest running surf contest, with divisions for all ages and levels. Proceeds from the event will support the efforts of WILDCOAST to protect the most beautiful, iconic and ecologically important coastal and marine ecosystems in California and Mexico.

“The WILDCOAST Dempsey Holder Surf Competition and Ocean Festival was inspired by Dempsey Holder, one of California’s most iconic watermen who helped pioneer big wave surfing at the infamous Sloughs Reef, now the Tijuana River Mouth Marine Protected Area,” according to WILDCOAST Conservation Director Zach Plopper. “This year the Dempsey will be raising awareness about the plague of plastic and water pollution in the Tijuana River watershed impacting our binational beaches and our coastal protected areas that are home to leopard sharks, gray whales, lobster, bottlenose dolphins as well as recreational ocean users.” 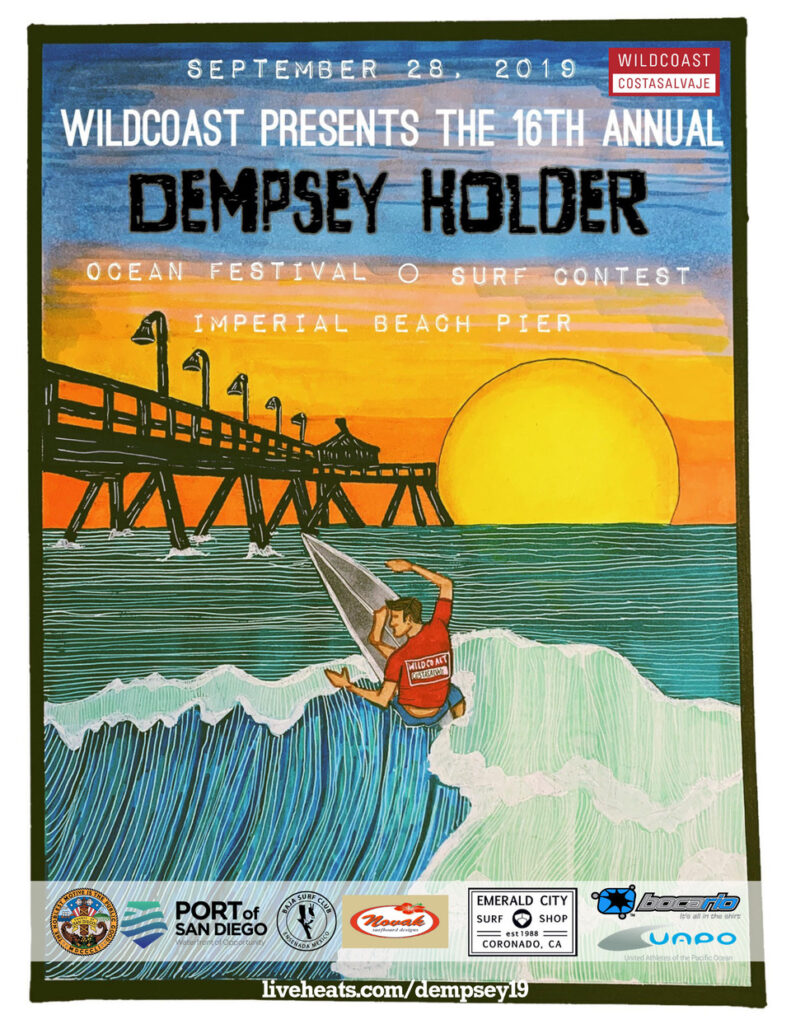 Once again the Dempsey will launch the Baja Bound Surf Series, a binational surf contest series that includes two additional events at Baja’s famed San Miguel, a world-class wave. The events in Baja include the Walter Coloca Invitational in November as well as the Baja Surf Club Invitational in January 2020.

For the second year in a row the Dempsey will also include an Adaptive Surfing division so that every ocean athlete can access the surf. “It has been amazing and so inspiring to include a binational group of adaptive surfers in the Dempsey,” said Plopper. “These dedicated surfers are incredibly committed and courageous.”

The Dempsey has also provided the first organized surfing competition experience for many young surfers in San Diego County and the US-Mexico border region. Thanks to our continued partnership with the United Athletes of the Pacific Ocean (UAPO), surfers from Baja California and throughout Latin America will be well represented at the Dempsey, making it a truly international event.

“Thanks to generous grants from the Port of San Diego and the County of San Diego (via Supervisor Greg Cox), Emerald City and other local sponsors, the 16th year of the Dempsey, will continue to be a fun, exciting and family friendly event for everyone,” said Plopper. “And this year we are holding it during prime south swell season so we hope to have some pumping surf for contestants to showcase their talent.”

WILDCOAST currently seeks additional sponsorships and in-kind support to carry out this year’s event. For more information and to make your donation please contact Yehuda Ben-Hamo at yehuda@wildcoast.org. Registration is at wildcoast.org.