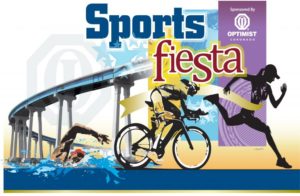 Why use the word historic to describe the Optimist Club of Coronado’s annual Sports Fiesta? Because it includes the longest continuously running triathlon in the world.

What has become a Coronado tradition led to the founding of the world famous Ironman triathlon in Hawaii.

Coronado resident, Optimist Club member and retired Navy SEAL, Dan Hendrickson, had witnessed the early Sports Fiesta triathlons. Later, he was stationed in Hawaii with Navy Commander John Collins, who had also taken part in the Optimist Club’s triathlon. Collins decided a race including a grueling swim, bike and run would settle which athlete was best.

“Several of us had experienced triathlons here in San Diego and the most notable one being the one here in Coronado,” Hendrickson recalls, “and decided that we needed a little more rigor in the race and put together what later became the Ironman Triathlon.”

The first Sports Fiesta triathlon took place in 1975 and has continued since. This year’s triathlon is July 27, and takes place at Sunset Park and North Beach in Coronado. The improved bicycle route will once again take riders onto Navy Base Coronado.

Competitors must be at least 8 years old. The beauty of the race is its short course, a 400-yard ocean swim, a 1-mile run on the beach and a 4-mile bike ride on Naval Air Station North Island. Don’t be confused though, for the more competitive athlete, there is also a separate 5K and a 1-mile rough water swim.

In keeping with tradition, the Hard Rock award will be given to the top three male and top three female finishers with the best combined times for the triathlon plus the 5K and 1-mile swim.

Most important, proceeds from the Sports Fiesta provide the bulk of annual funds the Optimist Club of Coronado distributes to roughly 50 youth groups including; the Boy Scouts and Girl Scouts, NJROTC, Coronado schools’ athletic teams and club teams, scholarship programs, robotics, oratorical and essay contests and many more.

To participate, donate or just plan a fun summer day at Sunset Park and Coronado’s world-class beach, go to optimistclubofcoronado.org.

All images from 2018 Sports Fiesta