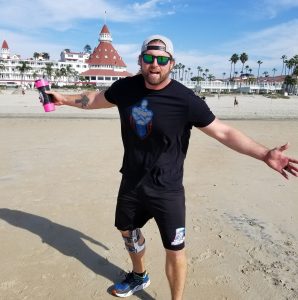 Travis Wilson is a Coronado dad and retired Green Beret. Not only did he serve, but he served in the same unit as WWII veteran Tom Rice. Travis was groomed to be a Green Beret, following in the footsteps of his father who was also Special Forces Airborne.

In a Navy SEAL dominated town, Travis laughed off military rivalry. To those not familiar, Travis explains that Green Berets are to the army what SEALs are to the Navy. While serving in the special forces branch, he experienced a near fatal HALO parachute accident. An incomprehensible tragedy that it still making headlines years later.

As if being a Green Beret is not enough of a challenge, Travis earned his degree in Exercise Science while on active duty. Between his education and his military experience he developed an interest in the human body and peak performance. Before moving to Coronado, he owned two gyms in Colorado. Now, his line of supplements named Alpha Elite Performance is where he focuses his energy.

There are many misconceptions around supplements, a common one Travis hears is, “if I use supplements, I’ll get too big.” Travis shares that he hears this more from women as supplements contain testosterone, but, he counters, many women need testosterone as their bodies don’t make enough on their own. Travis also busts the myth that there are supplements that act as a quick weight loss trick. He educates, “there are no such things as fat burners. Alpha Phen (an Alpha Elite product) can be a weight loss aid as it increases metabolism and curbs appetite.” A man straight to the point, Travis’ best advice is simple- “get up and do something.”

The idea for Alpha Elite stemmed from the desire to make a supplement made with ingredients that military personnel could take. This concept expanded into pre-workouts and endurance lines. Alpha Elite is a vegan product. It also helps to rid the body of heavy metals that military personnel and firefighters are exposed to. The supplements are made in a FDA regulated facility that is GMP certified. This insures that everyone from Travis himself to the clientele has full trust in the quality of the product.

While many might tear down their competition, when asked what separates Alpha Elite from other companies, Travis attributes it to marketing. “While there are some bathtub supplements made in a basement of a house with rice flour, most of the good ones are the same. It’s more who you want to support.” Veteran owned Alpha Elite tends to attract customers but the marketing is unparalleled. Travis runs the social media marketing himself and there are tens of story posts a day, all unique and engaging. The marketing also includes re-shares of real customer comments which adds a level of truth and trust in the brand.

While Travis’ family was moving to Coronado for his sons, Travis knew that immediately making connections for himself was also important. “I wanted to dive into the community; I joined Rotary.” Joining Rotary was an easy decision for him after speaking with then Rotary President, Ivan Dunn. Ivan and Travis discovered they both speak Russian and hit it off. Travis uses his extensive knowledge of social media to run the Rotary social media pages.

Alpha Elite, his family, and Rotary keep Travis busy but he still makes time for another cause close to his heart- Green Beret Foundation. Travis currently serves on the foundation. It is on their behalf that he is throwing the ceremonial first pitch at the Cleveland Indians game later this month.

With its combination of shops and restaurants, the Coronado Ferry Landing was one of the places in town that didn’t entirely shut down during...
Read more
People

It’s not every day that you’re given a key to the city by the Mayor of Coronado. Just ask Donna Salof, who turned 70...
Read more