“The Favourite” – Sometimes a Lady Likes to Have Some Fun

Forget everything you might judge in what first appears to be a fussy uppercrust 18th-century British period piece overstuffed with poufy costumes and haughty accents. Instead, in The Favourite, you’ll find a crackling black comedy with all the alcohol-swilling merriment, sexual debauchery and conspiratorial connivery of pirate days, except tucked into a stark, feast-or-famine wartime backstory. 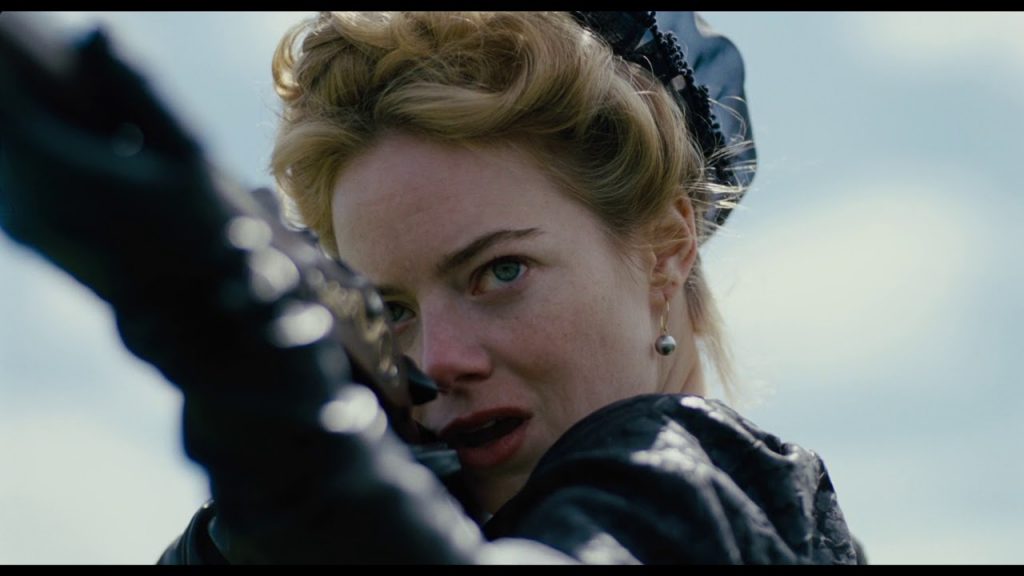 Former proper lady, fallen on hard times Abigail (played as a joyfully manipulative minx by Emma Stone) runs to the safety of her tart cousin Sarah (a wonderfully wicked Rachel Weisz), wife of the battlefront general and the confidante of the befuddled Queen Anne (an unabashedly grotesque Olivia Colman, who nails every one of Her Majesty’s multifaceted royal neuroses). First appointed as a bottom-rung scullery maid, Abigail isn’t settling for such a petty position, and through a series of delightful trips and tricks she becomes Sarah’s handmaid. This also makes her an immediate assistant to the Queen, which places the cousins eye-to-eye in the palace power rankings. And here the true storyline opens, with Abigail scrambling by any means to gain a foothold of security in this dysfunctional realm, and Sarah grappling not to lose her superiority in the social hierarchy and the unwieldy political scene as Abigail subtly works to undermine her. 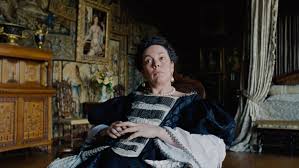 Into this mix plummet all the ugly, ungainly characters you’ve ever encountered at any public beach, local pool, or gym locker room. A pretty film this is not; everyone is pale and puffy, stuffed into bustled and buttoned-up regalia, and red-faced as if they have been crying behind the scenes. Nudity is frequent and flagrant, with plenty of bloated, hairy, untoned bodies. Eyebrows are unplucked, eyelashes are unadorned, fingernails are unpolished and uncut, and bare feet walk slappily across marble floors. Incongruously, laid overtop all this unsightliness, are the magnificent visual touches that define the era: KISS-style rock makeup; “Bohemian Rhapsody” hair a la the megaband Queen; outrageous, androgynous Elton John-style frocks; and vogue dance moves reminiscent of Madonna.

Throughout, notice the perfection in lighting and plot pacing. Majestic scenes unroll unevenly against hard, bland hues of beige, taupe, ivory and slate. Characters are done up starkly and simply in monotones. Thus, it’s the dialogue that stands out, peppered quick and sharp throughout every scene, conversations poking like a pitchfork through pompous backgrounds. It’s a slightly schizophrenic experience — the multilevel visuals are often repulsive, but the characters are so evil, and the plot so taut and spicy, that you can’t look away. It’s both intimidating and admirable. 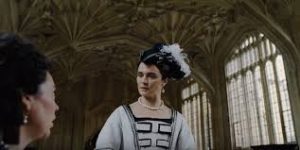 Quick Review: Black comedy/thriller teases and pleases. A period piece it may be, but it’s a rare treat of intelligent cinema that exceeds expectations in plotline, timing and actor prescience. Amid all their churlish bedevilment, these women gleefully gerrymander their monarchal mileau. As Sarah notes, after verbally skewering one of her male minions mid-movie: “Sometimes a lady likes to have some fun.”