Rob Jones has set out to do what no person has done before him – to run 31 marathons in 31 days, in 31 different cities, all on dual prostheses. He ran number 19 in Coronado today in a series of laps between the Hotel Del and Silver Strand. Rob is doing this to raise awareness and funds for three charities: the Coalition to Salute America’s Heroes, the Semper Fi Fund, and Tunnels to Towers Foundation. The first two of these focus on helping wounded service members and the last one helps both wounded service members as well as first responders.

Rob’s journey started when he joined the Marine Corps and deployed to Iraq in 2008 and then to Afghanistan in 2010. In Afghanistan, he was tasked with clearing an area of IEDs and was wounded by a landmine. His injury landed him back in the United States as a double amputee.

Rob’s wife, Pam, says that Rob skipped the “feeling sorry for himself stage because he knew there was no point in it. He couldn’t change what had happened. He has an uncanny ability to accept his situation and make the best of it.” In fact, she says that once he was out of the haze of medication, he asked someone at the hospital to make a video to take to his buddy who had also been injured. In the video, he tells his friend that they have to now look forward and work really hard to get stronger. His goal continued to be to serve his country. What changed was how he would do it. 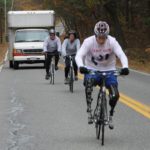 The next phase of Rob’s journey – named “The Rob Jones Journey” – came in 2013/2014, when Rob rode a bike across the country to raise funds for wounded veterans. The next challenge Rob gave himself was his current one: to run 31 marathons in 31 days. This phase of the journey started in London, where he ran his first marathon and immediately got on a plane to arrive in Philadelphia to run his second one the next day. Since then, he and his wife have been traversing the country in an RV, going from city to city to raise awareness for the wounded.

Rob says that his main message to the broader population is this: “Just because a vet comes home and is injured, physically, or emotionally, or however it is, doesn’t make them broken. They can still contribute to society and they can still work.”

For his “brothers” who might also be wounded, Rob says he “wanted to get this story out about this guy from Afghanistan who had to find his new way to keep fighting for his brothers and contributing to society and to America. I want vets to see themselves as people who can keep contributing.”

Rob says that the thing that is most special to him is “every time a group of supporters comes out. It lets vets see that they aren’t alone there is plenty of love and appreciation and support.”

One young man, who had come out to support Rob Jones was 9-year-old Aaron who estimated that he had run 11 miles with Rob today. He said that he became inspired by Rob through his grandmother – a track and cross-country coach – who had shown him some of Rob’s videos.

Those who want to be supportive, but who might not have made it out to run today, can go to Robjonesjourney.com with links that allow them to post to social media directly about the cities that Rob will be traveling to next, or donate directly, or to buy an official t-shirt.