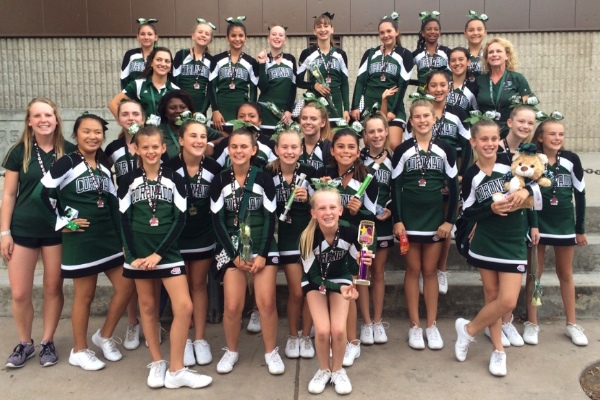 Cheerleaders are stereotyped to be bubbly and positive. The girls from the Pop Warner Jr. Midget Cheer team embody that happy persona and they have every reason to be gushing. The team has been working hard since August and it is paying off. The team placed at the WESCON Regional Competition last week and has reached its dream of going to Nationals in Orlando, Florida. This is the first time in over eight years that a Coronado cheer team has competed in Nationals.

Coaches Tandee Scott and Afrinia Xallen began working together when each of their daughter’s teams did not have enough cheerleaders. The pair of dedicated moms merged the teams together and it has been a great team and a great time ever since. Their first year coaching together the team qualified for Nationals, but the team opted not to go. Now the cheerleaders are stronger in their skills and stronger as a team and they are ready for the challenge.

How big is this competition? Huge would be an understatement. Nationals hosts over 300 cheer and dance teams and they undergo several days of practice and competition. Cheer Squads compete in four different age ranges (Jr. Pee Wee, Pee Wee, Jr. Midget and Midget) and also compete in sizes (small, medium and large). The competition will be held at the ESPN Wide World of Sports Complex in Orlando, FL. The girls of the Coronado Pop Warner Jr. Midget Cheer team are beside themselves with enthusiasm, and it is easy to see that they are not intimidated. Sadie (7th grade) admits, “I know the other teams are really good,” but her teammate Kelli (7th grade) chimes in, “but we are really confident in what we have.” Kelli continues that she is “so excited to see all the other teams,” and her coach Afrinia is thinking about the competition as well, “there are going to be a lot of teams out there- Texas, Oklahoma, big teams.”

Competing in Nationals is an honor, but not the only thing these young ladies are looking forward to experiencing. Sadie is excited about the bonding that takes place “in the hotel, plane, everywhere! They shut down Disney World for the night and the Pop Warner teams get to go!” For a team that has worked so hard together, they are excited to continue this journey to Florida as one.

The Jr. Midget team has four new girls this year but the other 21 girls were also on the team last year. Coach Afrinia beams, “seeing the girls grow since last year has been amazing.” Although the team is aiming to do well at the competition, the consensus overall is that they are delighted to make it as far as they have and are proud of themselves, which reflects highly on the coaching they have received.

To help support the team finance their hard earned trip of a lifetime, you can donate to their GoFundMe, or dine at Costa Azul TODAY between 6pm and closing and a percentage of the proceeds will go to the cheer team (just mention that you are there to support the Coronado Pop Warner Cheerleaders). Costa Azul will also be featuring live music tonight.