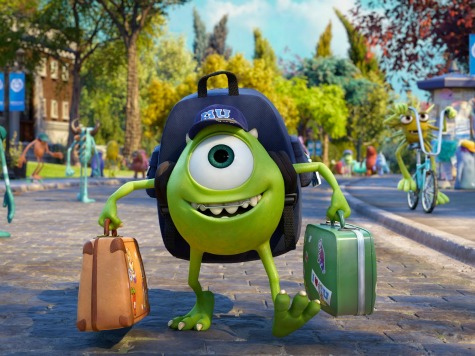 Monsters University
, Pixar’s newly-released prequel to 2001’s Monsters, Inc, features the return of lovable monsters Mike Wazowski and James P. Sullivan on their quest to become the top Scare Team at Monsters Incorporated. The film opens with a quick peek of the duo as children, then quickly moves with them to Monsters University, the top school for scare education in Monstropolis.

Monsters University is a thoroughly entertaining coming-of-age tale that highlights the importance of friendship, honesty, and perseverance, even in the face of seemingly insurmountable obstacles. The film does, however, lack the abundant slapstick antics of its predecessor, and it is noticeably missing the sweetness injected by Monsters, Inc’s human toddler, Boo, and her relationship with the monster Sulley.

Fans of the original Monsters film will recognize the voices of Billy Crystal, John Goodman, and Steve Buscemi as they reprise their starring roles as Mike, Sulley, and Randall Boggs, respectively. There are also several enjoyable cameos from other Monsters, Inc characters. Composer Randy Newman, who has written the score for seven Pixar classics, including Monsters, Inc, also returns to provide another quirky jazz score that mixes the first film’s familiar themes with quintessential drum line riffs to remind viewers that the characters are, after all, college monsters now.

Several kindergarten-aged viewers at a recent Village Theater showing of the film all gave the movie a nod of approval. Monsters University was “even better than Monsters, Inc,” reported five-year-old Ava, though she cautioned that Monsters University “was a lot scarier, too”. The intensity of the G-rated Monsters University peaked at about the same level as its predecessor, but the scary scenes were considerably more frequent throughout the new film; parents of preschoolers and children who are easily frightened might consider holding off on Monsters University for a few years, but older elementary-aged kids will probably find it appropriately thrilling.

Do you have an idea for a story that you would like to see on eCoronado.com? Contact us here.