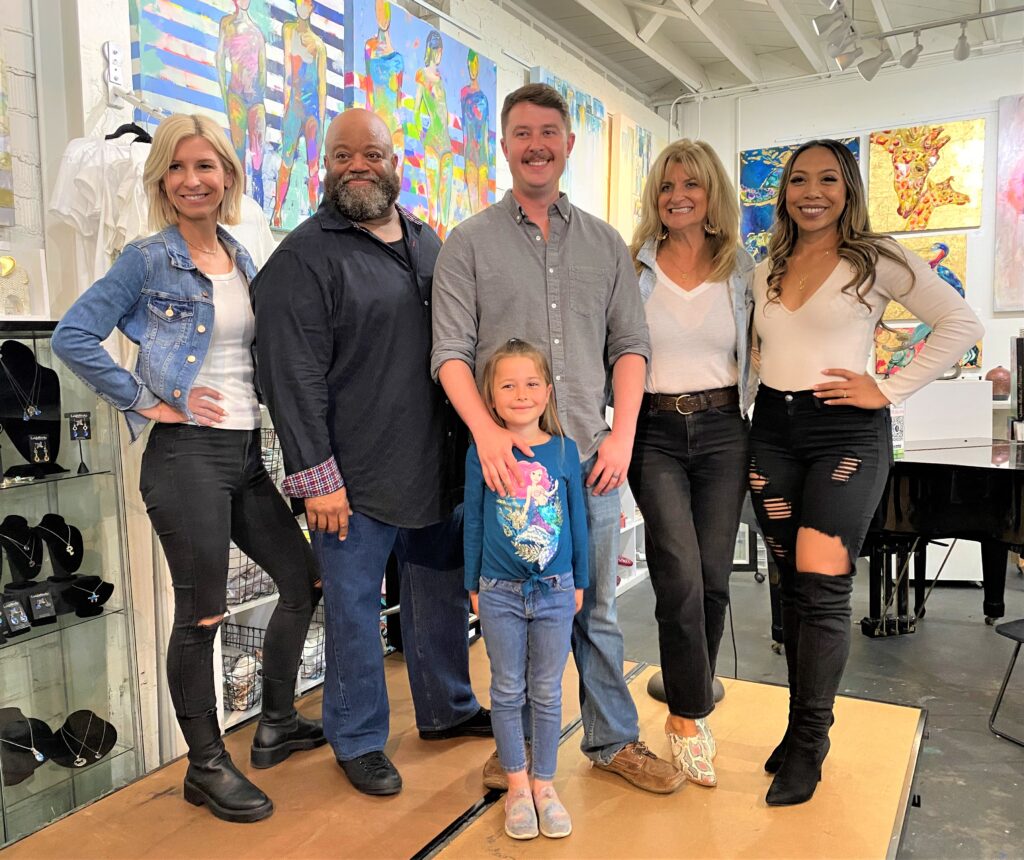 It was a packed house of fun-loving people ready to laugh at the recent Crown City Comedy show at Emerald C Gallery, which is the perfect intimate and inviting space to listen to top notch comedy (and you can bring your own beverages). We thoroughly enjoyed the show, and we were glad our friends, Jake and Tiffany, were able to get last minute tickets to join us for the sold out event. We all declared it a super entertaining evening, and we will definitely be back for more levity. I encourage everyone to check a future show, you won’t be disappointed! Get more details about Crown City Comedy on Facebook and Instagram. 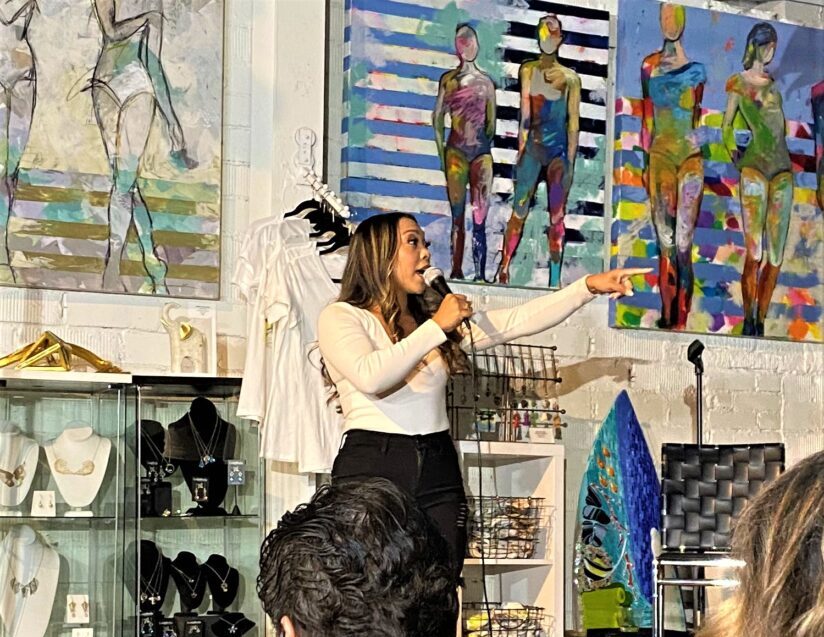 Host Kristel Dela Rosa got the audience warmed up with her cultural observations and continued her narrator POV throughout the evening as she introduced the all-star line-up, with great facial expressions, noises, and surprising the audience when she did the splits. 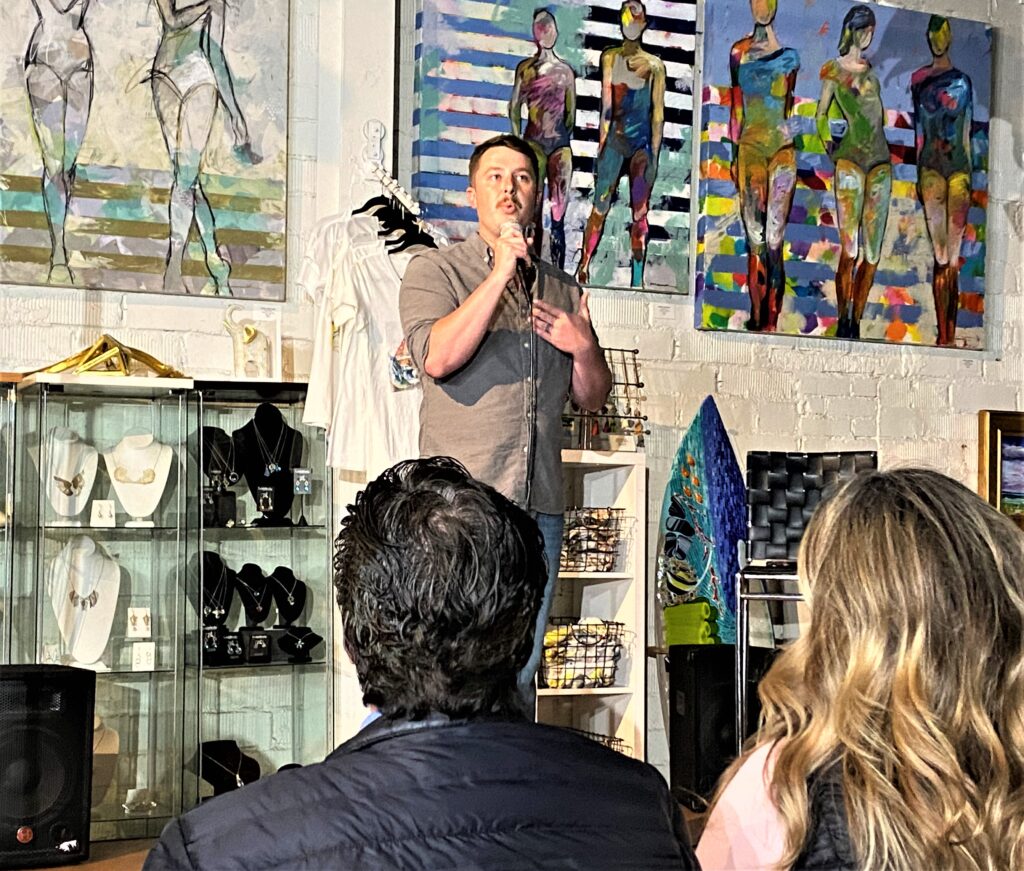 Taylor Dunn, creator and producer of Crown City Comedy, was up first and tried out all new material, some which he hadn’t even written down yet. From his thrift ensemble to Waffle House stereotypes, military and family themes, the crowd loved his observational comedy and laughed throughout his set. 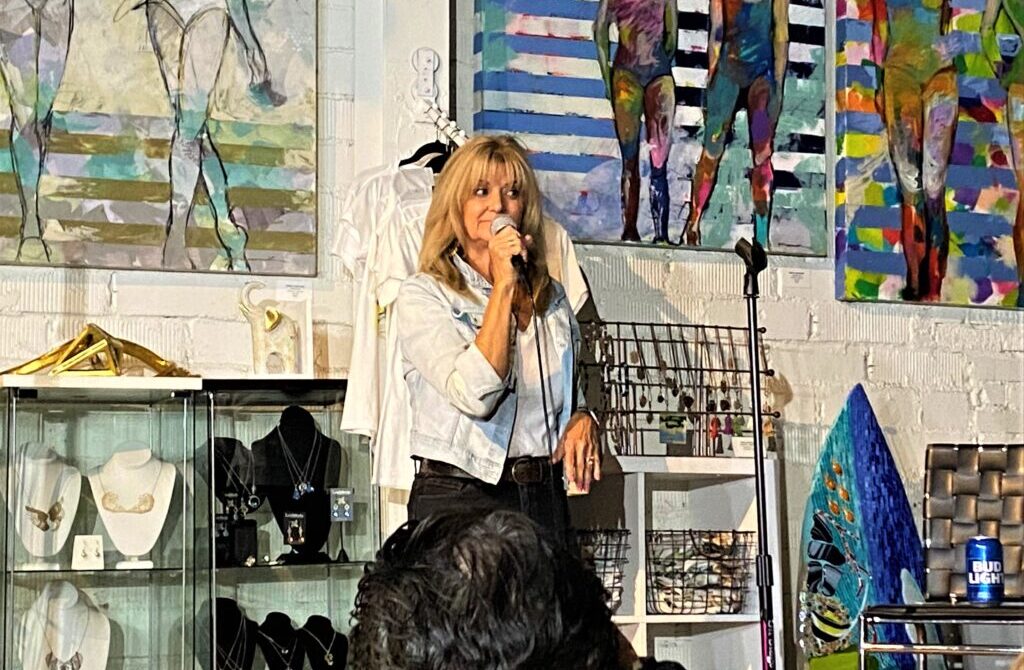 Long-time Coronado resident and funny woman Sue Baker Shirey entertained the crowd next with personal stories covering a wide array of topics, from her recent divorce to her hilarious match.com experiences. 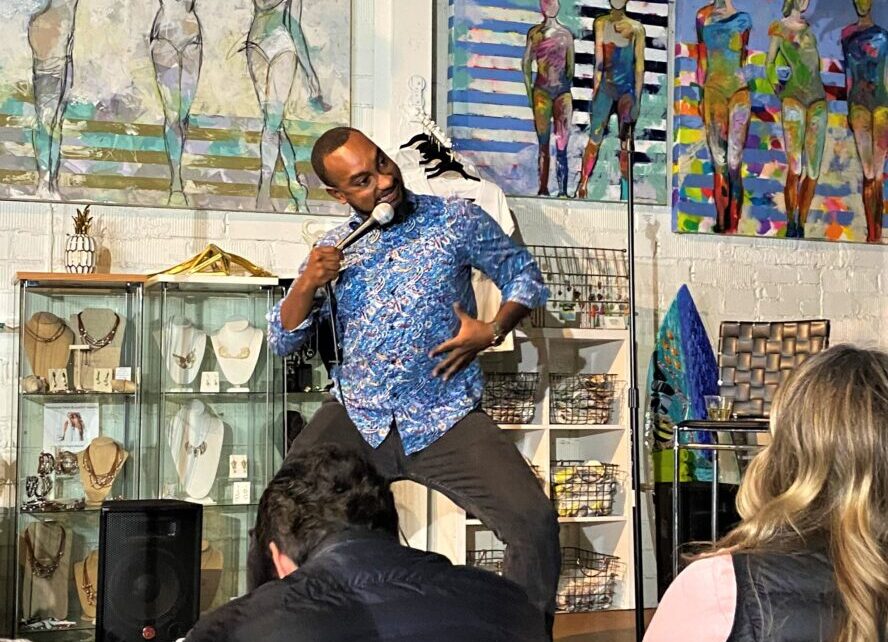 Walter Ford brought down the house with his physical comedy routine, showcasing comparisons from his hometown in Indiana to San Diego, where he now calls home. From Prius to Tesla jokes, his moves had people rolling about his disastrous experiences on Tinder, commenting “God gave me the gift of gab in person.” He appears regularly at The Laugh Factory, and has been on network television, including The Steve Harvey show. 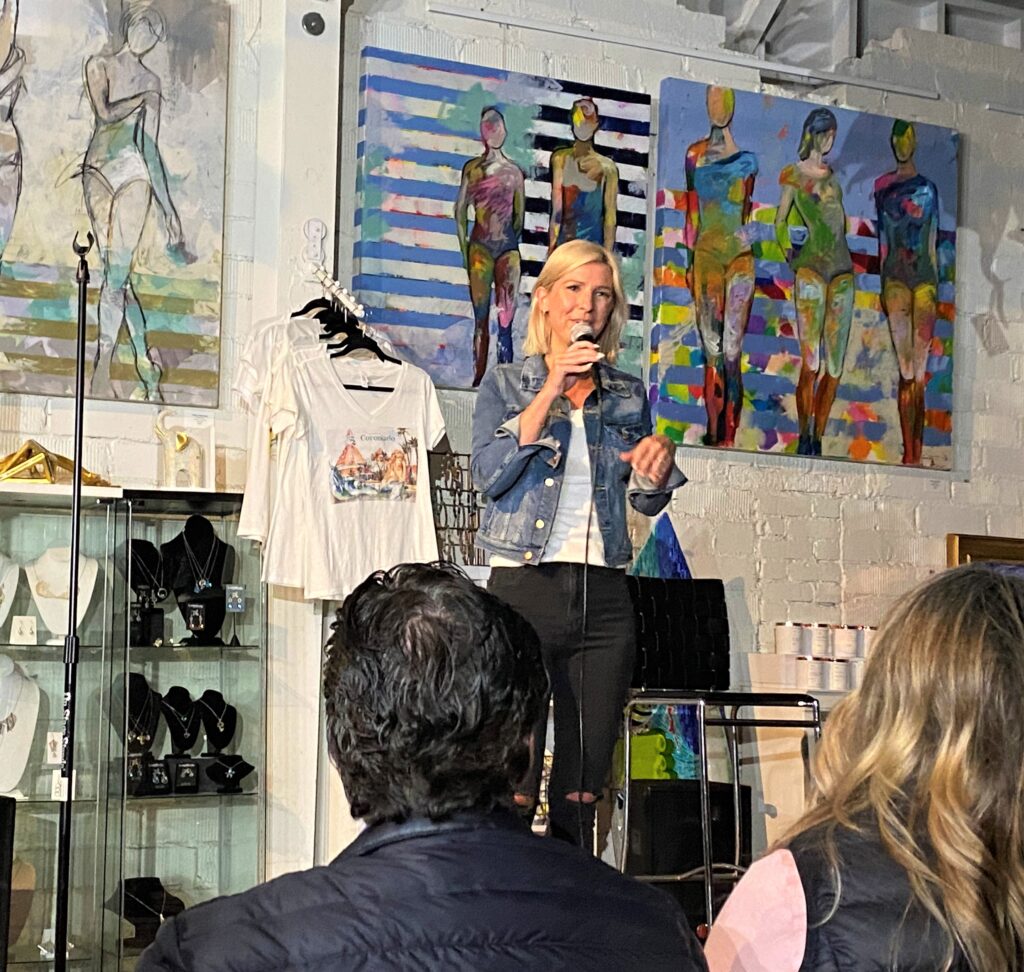 From North County and having been on The World Series of Comedy in Las Vegas, next up was Kimbles Hume, whose British accent made her stand-up routine funnier, even making fun of her name. As a mom of twins, she had plenty of comedic material, with humorous personal stories galore, and we won’t soon forget about her family or her dog. 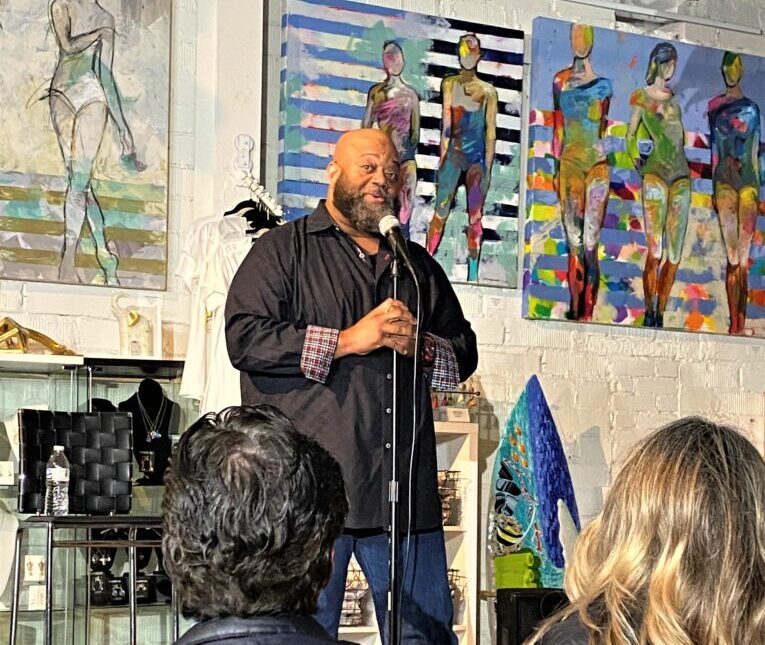 Recently nominated for two Emmys, and just back from filming a Christmas movie, Mark Christopher Lawrence was the headliner for the entertaining evening. From the moment he stepped on the stage, his voice resonated, and he even sang beautifully. His set was filled with personal stories, mentioning that “he has looked the same since kindergarten, except for the beard.” He had the audience relating to all the things we missed during the pandemic, like hugs, and everyone was roaring as he detailed getting facetiously kicked out of Nordstrom for caressing and singing to a mannequin.

A self-described storyteller, he promised that his jokes all contain an element of truth. Who can forget his comedic claim to fame as the comic who caused a heart attack and nearly killed a guest with his jokes? He revealed fun food experiences from the South, saying that people in Missouri love biscuits, and he shared that if you like fluffy people, you should plan to visit. He commented that he and his love handles “need each other.” His schtick about the Curves gym, his dating antics, and shower safety spiel were highly entertaining and had some people laughing so hard they were crying. A seasoned professional who lives in San Diego, he proclaimed that stand-up comedy is his most enjoyable work. His sense of timing was impeccable, and the audience loved every minute of his routine.  He is known for his many movie roles, as well as playing the Big Mike character on the television series “Chuck.” 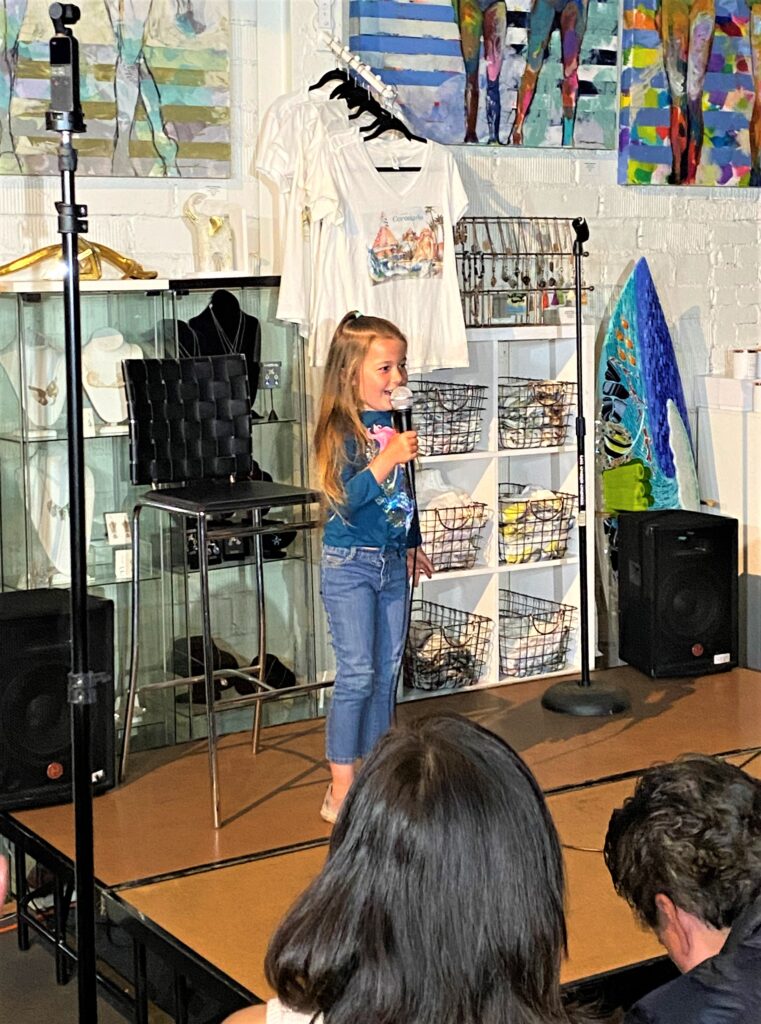 Last, littlest, but not least, was Taylor Dunn’s six-year-old budding comedian daughter Lily, who closed the show with a great joke. What do you call a snail on a ship?…
.
.
.
.
.