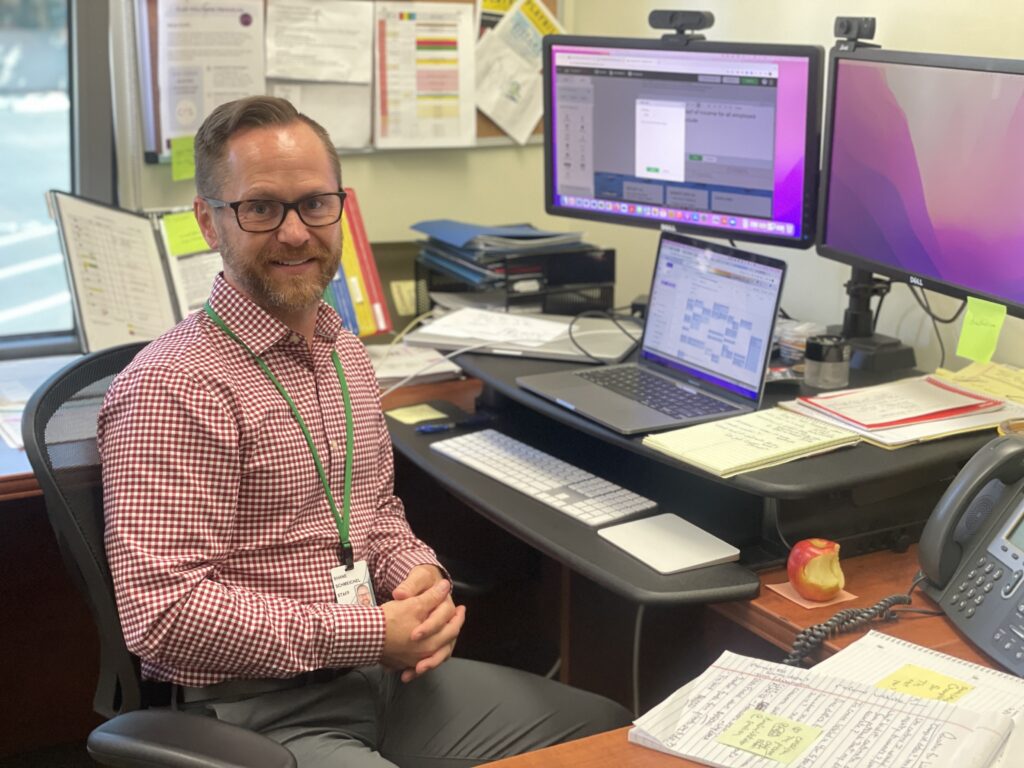 Shane Schmeichel was named CUSD’s Director of Special Programs last July. The title sounds a little enigmatic at first; after all, what are these special programs, and what exactly does Schmeichel do?

He’s responsible for directing operations in district-wide programs from high school all the way down to CUSD’s youngest learners, including Coronado School of the Arts (CoSA), Career Technical Education (CTE), STEM and VAPA, Department of Defense Grants for world languages (DoDEA), as well as C-NADO, the district’s homegrown character development program. He also runs WeTip and Lightspeed, the district’s student safety monitoring initiative. Oh, and then there’s the preschool: he heads that up too.

Basically, Schmeichel directs, supports, and develops operations for some of the very programs that define CUSD as a successful and unique school district, according to Superintendent Karl Mueller. These are the programs that the district wants to see thriving when the district reaches basic aid in 2025-2026, when CUSD will receive roughly 20-25% more funding.

“We cannot wait until 2025 to start building the programs that we want to see in the district now,” says Mueller. “So the governing board, in its Long Range Plan, directed the staff to start building the programs and finding creative ways to fund them, so when we hit basic aid, we have these programs in place. Without a director like Shane, these responsibilities would be diluted and would become the responsibility of site administrators who are already busy.”

Funding is another part of the job. Schmeichel says he spends much of his time reaching out to organizations in the community to help fund these special programs like CoSA, San Diego’s premier public school arts conservatory. For example, he was able to obtain a grant for $100k for technology updates at CoSA, as well as $25k grant from the Conrad Prebys Foundation.

“Shane is always out there hustling,” says Mueller. “And it’s important for the community to know that his position—the Director of Special Programs—is funded primarily through grants, not from the general fund.”

According to Mueller, Schmeichel’s background in the arts and CTE made him an easy choice for the position. In fact, when he was hired back in 2012 as assistant principal of CHS, his main responsibilities were CoSA and CTE. Mueller says his experiences in those areas are “invaluable,” as well as his connections with the greater San Diego arts community and his ongoing relationship with Southwestern Community College.

It’s not always a 9 to 5 job. According to Schmeichel, he attends almost every state-related meeting or conference that he can, that could potentially bring something back to Coronado. He also actively attends community-wide arts events and those throughout San Diego County that often run into nights and weekends.

“It’s all about the connections,” says Schmeichel. “As a small school district, it’s imperative that we have a staff member who strategically connects with invested educational partners who can support all that we do.”

College and career readiness is another major responsibility of the job, and it’s becoming one of the biggest indicators on the California state dashboard, which ranks and measures school success.

“When we talk about college and career readiness, one of the obvious things that comes to mind is our partnership with Southwestern Community College, which allows our students to take classes for college credit in high school,” says Mueller. “This position also works with the K-12 California Strong Workforce program, which brings funds into CUSD. In the past, that’s fallen into the roles of the Director of Learning or high school principals.”

According to Schmeichel, this year CUSD is getting $230k in funds from the CTE initiative grant, which is double from last year. This grant will help pay for 15 CTE teachers for career technical ed.

“This funding for these teachers does not come out of our general funding,” says Schmeichel. “It comes from a variety of sources. Each year the state changes what’s available and how you qualify, so you have to keep up.”

Then there’s the data collection and reporting that greatly impacts the California school dashboard rankings. Even something as mundane as reporting can require attention and oversite.

“When it comes to college and career readiness, the state has made a lot of changes to how it measures students who graduate with A-G requirements, or the requirements for graduates to attend UC or California state schools,” says Schmeichel. “We have to make sure that what is happening in the classroom actually gets reported to the state correctly, and in our tiny district, we rely on individual people. Other districts have a data team of 6-8 people.”

Schmeichel says he’s most excited about the $2.3 million DoDEA grant for world languages, the largest ever awarded to the district. He says that Coronado will be the first of nine districts across the state to get DoDEA money for world languages as part of a brand-new program spearheaded by the U.S. Government.

“I’m excited to bring Spanish to all the kids in our district,” says Schmeichel. “How amazing to be miles from Mexico and now we will truly get to have a celebration of what biliteracy means.”

When it comes to challenges, Schmeichel says that the district’s youngest learners may give him a run for his money. With the state’s new requirement that, by 2024-2025, all four year olds will have an option to attend Pre-K at either Village Elementary or Silver Strand, Crown Preschool is expected to shrink in size. Schmeichel will take over operations of the preschool as now, it too, becomes one of the district’s special programs.

“The preschool is a whole new language,” laughs Schmeichel. “It’s a completely different system, with different acronyms and reporting requirements. It’s quite an undertaking, but it’s fun.”

Mueller believes he is ready for the challenge.

“Shane is a champion of special programs in our district, and has been since he was hired in 2012,” says Mueller. “In this role, he has opportunities to really strengthen and grow these programs under his authority, and to ensure that our programs build success from elementary school all the way up to high school.”