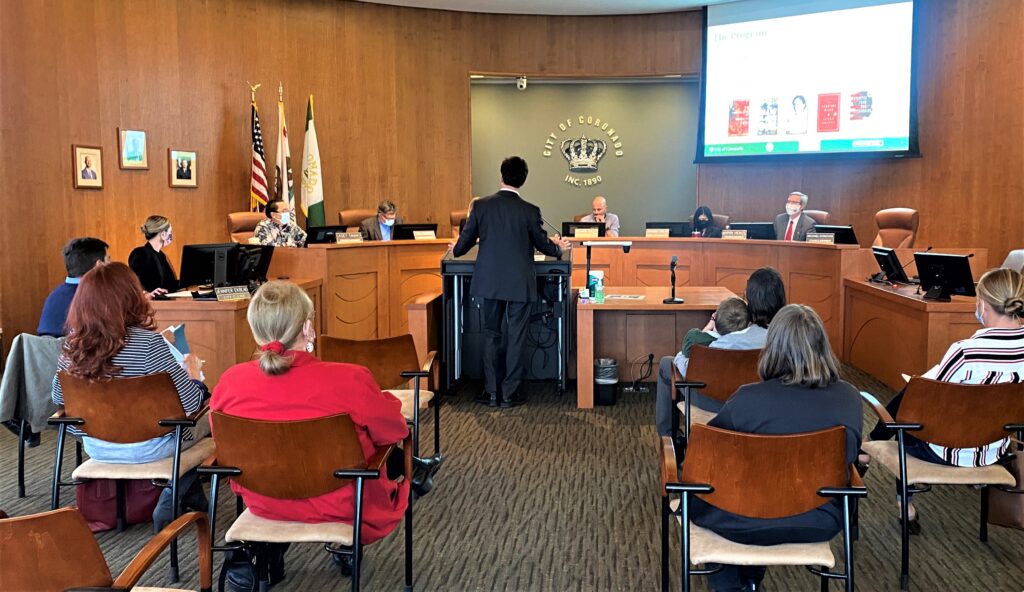 The City Council meeting on February 16 began with Library Director Shaun Briley announcing the sixth annual 2022 Coronado Community READ, which is West With Giraffes. He noted that 35 titles were nominated during October and November 2021, and then the evaluation process was conducted by the selection committee consisting of library staff, community partners, and local book club members, who narrowed the field to five. The five books were: The Dog Who Could Fly by Damien Lewis, Hamnet by Maggie O’Farrell, The Midnight Library by Matt Haig, Into the Beautiful North by Luis Alberto Urrea, and the winner West With Giraffes by Lynda Rutledge, which is a historical fiction story with strong San Diego ties. The affiliated teen book is Turtle in Paradise by Jennifer L. Holm and Savanna Ganuchea and the kids’ book is Ty the Quiet Giraffe by Carrie Hasler and Barbara Ball. Watch for details on upcoming April events which will include movie showings, book discussions, topic panels, and concerts.

Andre Monette of Best, Best, & Krieger (BBK), gave an update on federal lobbying efforts to address the Tijuana River environmental issues. He noted that since Congress allocated $300 million for border sewage, the EPA has moved forward in proposing projects to address Tijuana River sewage issues. This comprehensive list, developed with a large group of shareholders in the South Bay, including Coronado and the Navy, has a price tag of $600 million. 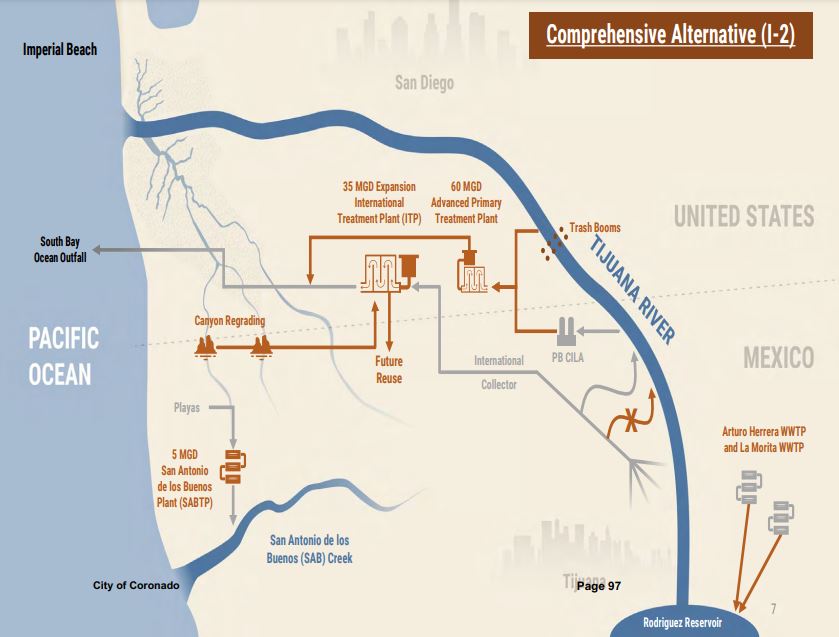 Next steps include environmental review and project implementation, while seeking additional funding from Congress, other government entities, and private investors. Monette pointed out that even though this is a bi-partisan issue, getting full funding will be a lengthy process and the goal is to get money each year and work in a phased approach. The EPA hasn’t prioritized the projects, but major changes to San Antonio de los Buenos treatment plant and canyon regrading will likely be some of the first projects to move forward.

Councilmember Sandke asked about the potential of water reuse by an Israeli company in the Guadalupe Valley wine region, and Monette said private investments for water use in Mexico are a possibility that won’t work in the U.S., due to stringent requirements.  Councilmember Heinze also asked if BBK could work on helping with federal advocacy to secure funding for the last mile and half of utility undergrounding on the Silver Strand. 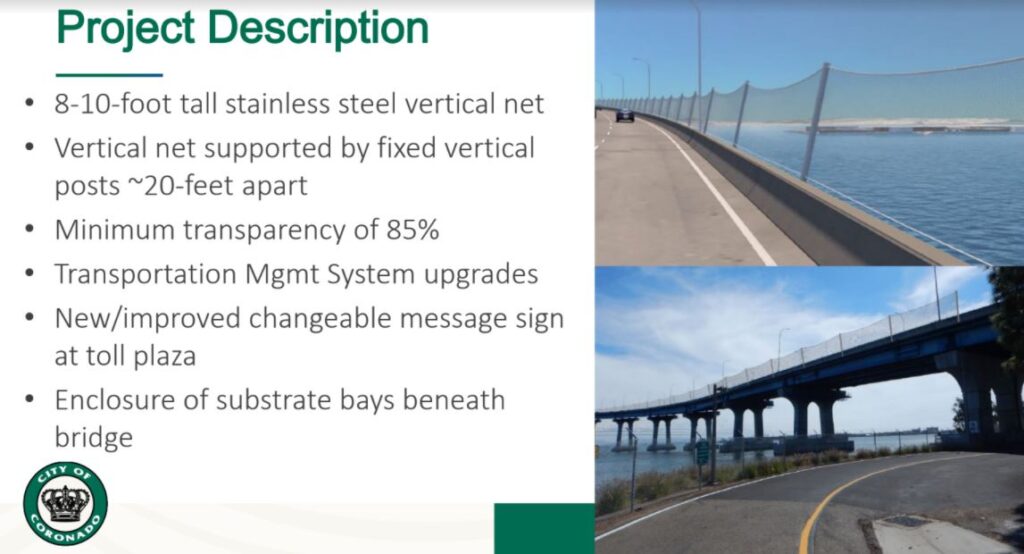 The project also includes transportation management system upgrades, new changeable sign at the toll plaza, and the enclosure of substrate bays beneath the bridge. In addressing the environmental analysis, he pointed out that the visual impact to motorists is minimal since the net has a minimum transparency of 85 percent. Traffic impact concerns would be considered, while work is progressing on the project, which is estimated to take 550 days, as well as conservation efforts for the nesting peregrine falcons. This will provide a tremendous benefit of reducing suicides and attempts, which will result in fewer bridge closures, and decreased emergency response needs. He noted that this design is the preferred design of the Coronado First Responders.

Councilmember Tanaka asked about statistics on how effective this was as a climbing deterrent. Councilmember Sandke noted that it has taken a long time to get to this point, but now with regional support, it is a great foundation to move forward. With Councilmember Donovan absent, the council unanimously approved, submitting a letter in favor of this project.

Senior Management Analyst Kelly Purvis gave a review of the Community Grant process and recommended updates. She highlighted that staff recommended no changes to the types of grants, established evaluation rubric, application, or the four community elements of economic development, social services, community pride/sense of place, and arts and culture.  Suggested revisions include:

Applications will be released on February 18, with an April 1 deadline. Funding will be awarded and distributed in June. Purvis said the anticipated $1 million community grant cap is generous, noting that the City of Encinitas gives $160,000 and Carlsbad gives $110,000 in community grant funding. As an example of one of the changes, Mayor Bailey asked if CHS could request funding for team shirts, as a public school open to the community versus a private school like Sacred Heart, to which City Attorney Johanna Canlas said that in order for faith-based organizations to receive funding they have to be open to everyone but said she would look into it further.

Executive Director Georgia Ferrell of Safe Harbor Coronado gave input that adding too many formulas takes away from the city council’s wisdom and to secure the maximum funding, an organization must get a 100 point rubric score and that has only happened once. She commented that this puts added pressure on nonprofit organizations, and she talked about how her organization has seen an increase from 14 percent to 21 percent in teens answering that they have considered suicide since the pandemic began.

There was a lengthy council discussion with Councilmember Tanaka indicating that the goals have been accomplished with the changes, but he didn’t agree with the cap reduction. Councilmember Sandke pointed out that the lower cap allows new organizations to potentially receive funding. Councilmember Heinze supported all the changes and asked that salary reimbursement be looked at next year, and then made a motion to accept the changes and look into salary reimbursement and faith-based organization requirements for the future, but then after further discussion changed it to support the staff report and it was approved.

Three candidates applied to fill the remaining term expiring August 31, 2024 for the Library Board of Trustees. They were Anne Parish, Todd Little, who pulled his name before the vote, and Julie Webb, who was named to the position.

The council approved Dawn Richards to serve on the Cultural Arts Commission for the remainder of the term expiring December 31, 2023.

During Oral Communication, former Councilmember Carrie Downey called in to ask the community to submit photos and videos for the 50th anniversary video being put together for Concerts in the Park. Submissions can be emailed to [email protected] by February 28.

Also during Oral Communication, Katie MacCrossen-Bosworth and Sue MacCrossen asked the council to consider restoring the children’s aquatics program to its former 2019 vibrancy. The swim and Camp Coronado programs have been curtailed due to the pandemic but are urgently needed. They were concerned with the private companies replacing the affordable and more comprehensive tried and true programs. Mayor Bailey said staff will follow up on this matter.

Adorable Alistair Jake Hardt came to the podium and said he was there about a dangerous crossing at the intersection of 8th Street & D Avenue that impacts him. His mom also advocated for improved safety, as this is used daily by dozens of children going to and from school [and high schoolers at lunchtime headed into town] with no stop signs or lights. Mayor Bailey asked her to give her information to city staff so they can get details and look into this further.

On the Consent Calendar, the council adopted a resolution prohibiting right turns onto the Block 153 alley (between Orange and D Avenues from Second to Third Streets) from eastbound Second Street between the hours of 2 and 6 pm. The Engineering Division completed an assessment and made this recommendation.

Councilmember Sandke said that talks for the Summer Shuttle are getting started for this year’s program.