SACRAMENTO — After a thorough review and analysis of the incident following the conclusion of the Division 4-A Regional Basketball Championship game between Coronado High School and Orange Glen High School, the CIF State Executive Director reiterates that discriminatory and racially insensitive behaviors toward an opponent contravene the principles of education-based athletics. In this instance, there is no doubt the act of throwing tortillas at a predominately Latino team is unacceptable and warrants sanctions.

While consequences are warranted for such an egregious action as throwing tortillas at a predominantly Latino team and the sanctions below are being levied on the athletic program at Coronado High School, we must all be aware that behavior does not normally change with sanctions alone. The path towards real change comes with the development of empathy for those who are on the receiving end of this type of degrading and demeaning behavior, no matter the proffered intent of that behavior. Adherence to the principles of Pursuing Victory with Honor is expected at all levels of high school athletic events and, in particular, championship contests.

Based on the investigations conducted by the local schools and school districts, the events depicted in the video evidence, and this office’s review, the sanctions below are levied against Coronado High School:

Note: The details and reporting requirements of the above sanctions will be done in cooperation with Coronado High School, the State CIF, and the CIF-San Diego Section.

After the ruling by CIF, Coronado Unified School District send out the following release: 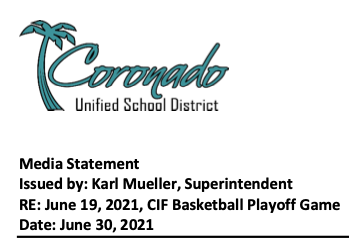 The California Interscholastic Federation (CIF) issued its decision today regarding the recent Division Championship game, where a post-game incident involved tossing tortillas into the crowd and at players. The CIF decided to levy various sanctions against Coronado High School, including vacating the 2021 Southern California Boys Basketball Division 4-A Regional Championship. We are currently reviewing the decision and will evaluate a possible appeal. We have also retained an outside investigator to thoroughly review the incident, which will guide any additional corrective actions. Whatever actions we take to address this matter, this incident and the CIF decision have served as clear reminders of the importance of sportsmanship and respectful conduct toward one another.