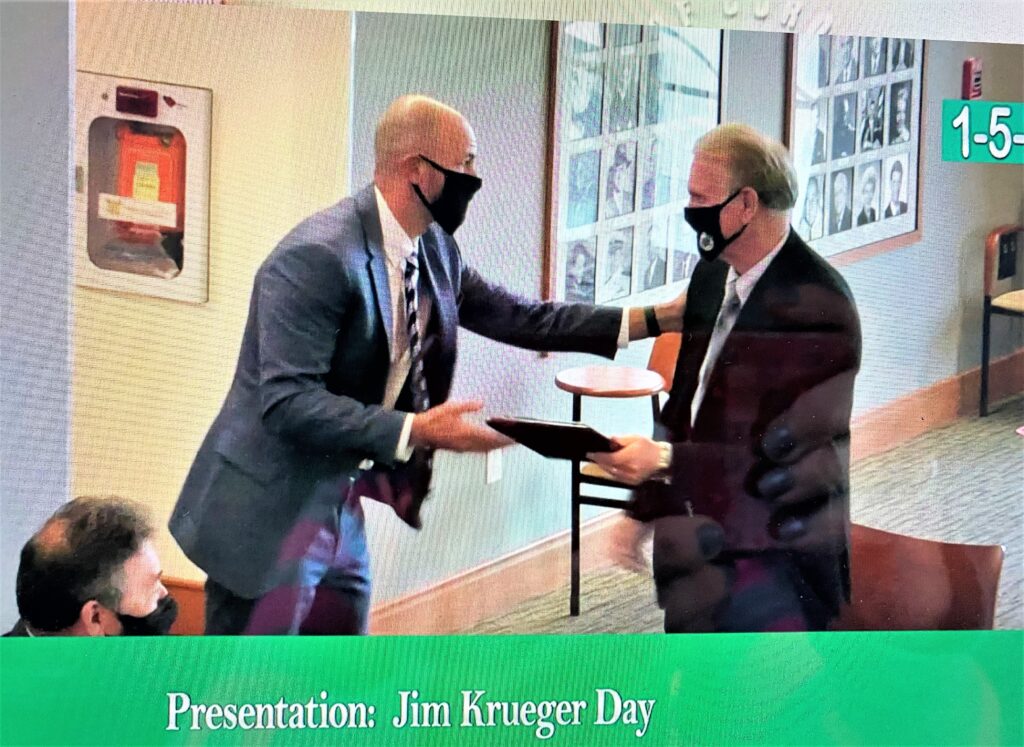 The topics for the first City Council meeting of the year ranged from mid-year budget adjustments, help for local businesses, to the Ocean Boulevard enhancement project and the Community Read announcement.

Mayor Bailey recognized the outstanding service of Director of Administrative Services Jim Krueger by proclaiming January 5 as “Jim Krueger Day.” Krueger has been with the city since 2015 and was in charge of the Human Resources, Finance, and Information Technology departments. During his tenure, accomplishments include the refinancing of the Community Development/Successor Agency bonds worth $120 million and implementing the 1.5 percent employee pension cost sharing. He will be moving to Pocatello, Idaho to become the Chief Financial Officer for the city. Mayor Bailey thanked him for his competency and efficiency and gave him the key to the city. City Manager Blair King had high praise for Krueger with whom he worked before and said that they will begin recruiting to fill his position. 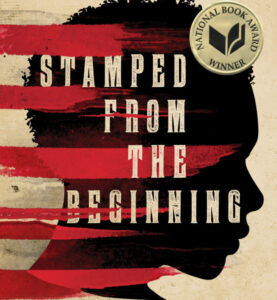 Stamped from the Beginning by Ibram X. Kendi was the selected title for the fifth annual Coronado Community Read after 1000 total votes were cast between the five finalists. The teen book selection is Stamped: Racism, Antiracism, and You by Jason Reynolds and Ibram X. Kendi, and the children’s book selection is The Day You Began by Jacqueline Woodson. Coronado Public Library Director Shaun Briley and Senior Management Analyst and Cultural Arts Administrator Kelly Purvis made the announcement and distributed copies of the book to the council. The selection process began back in September with 50 titles nominated. A screening and evaluation process was conducted by Coronado Public Library staff, community partners and local book club members, who then narrowed the field to five books. The other selections were: Born a Crime by Trevor Noah, All the Light We Cannot See by Anthony Doerr, The Warmth of Other Suns by Isabel Wilkerson, and Small Great Things by Jodi Picoult. Copies of the chosen book are available at the library, as well as by ebook and e-audio copies. Virtual events, including a movie series, book discussions, and topic panels, will be announced for February. 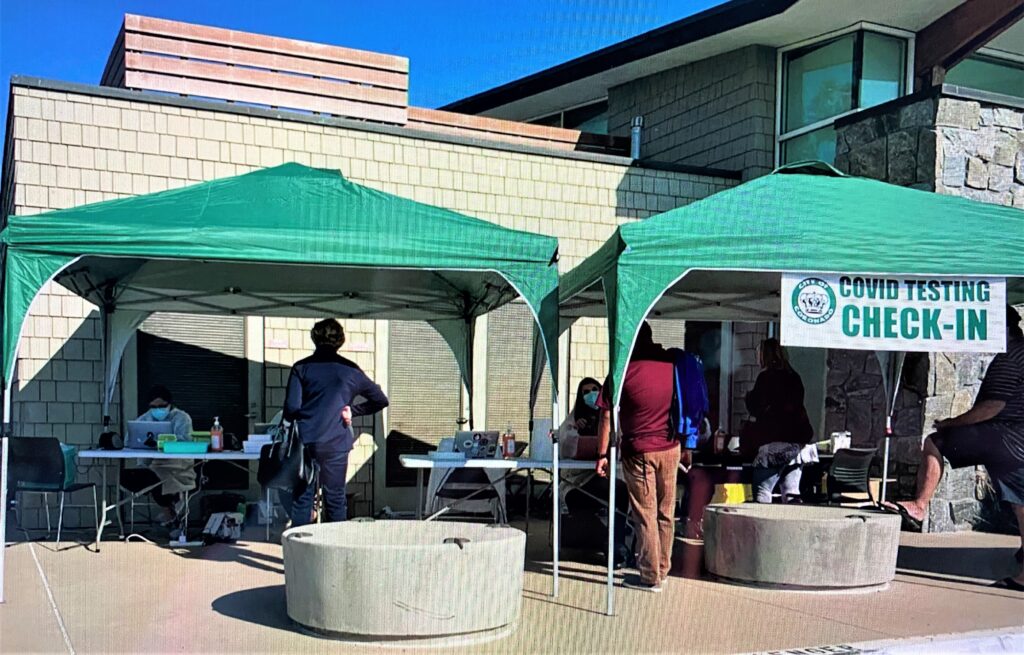 In the City Manager’s Report, Blair King highlighted that the new COVID testing site is up and running on Mondays and Thursdays from 9 am to 1 pm at the Boathouse. He was one of the participants on the first day when 99 people received testing, and said the process went smoothly and he was in and out within 30 minutes. The site offers three types of COVID-19 tests, including the antibody, rapid and viral tests. Walk-ins are accepted, but appointments are recommended and can be made on the city website at https://www.coronado.ca.us/government/departments_divisions/fire_services/covidtesting.

King also said that the majority of first responders, firefighters, and lifeguards have received the COVID vaccine. They will in turn serve as vaccinators for others in the future. The city is working with the county to obtain additional vaccines to inoculate the Police Department.

The most debated item of the meeting was Councilmember Casey Tanaka’s request that the council reconsider the proposed Ocean Boulevard Improvement project. He said that based on thirty-seven public comments, which were submitted prior to the meeting by citizens voicing their mostly opposing opinions on this subject, and talking to residents, he is “confident the public wants no change.” Councilmember Sandke indicated that the current approved option was workable, albeit maybe not perfect, but would offer greater sidewalk access on Ocean Blvd. Mayor Bailey said, “There hasn’t been a clear consensus on this issue over the past decade, but the area is not up to Coronado standards.” Councilmember Heinze questioned if making small changes, like moving the light posts, would trigger additional ADA requirements. Principal Engineer Jim Newton indicated that the current sidewalk width is ADA compliant, but certain ramps are not and have to be reconfigured. Councilmember Donovan said, “We owe it to the public to give proper notification.” Ultimately, the council voted unanimously to continue this item and have city staff send advance public notices to the residents in the area.

A variety of economic development options to help local businesses survive the challenges triggered by the pandemic were discussed and approved by the council. First, King discussed the $1.7 million in non-interest loans given to approximately 100 local businesses. A recent letter from Chamber of Commerce President Sue Gillingham, with many of the businesses signing on, advocated for not requiring repayment until the economy improves. The council voted 4-1 to extend the loan repayment date until December 31, 2021, with Councilmember Sandke stating, “I am not supporting this because I need us to get to forgiveness on the loans.” There was then discussion on allocating the remaining $300,000 of the $2 million that had been set aside for the loans. One option was to offer an additional $3,000 to businesses. While Mayor Bailey and Councilmember Donovan both preferred to allocate the remaining funds immediately, the council voted 3-2 to defer reopening the Lifeline Loan Program to a future date.

Restaurateur and Coronado resident Ken Irvine presented via phone about his Dine.Direct delivery businesses created by restaurants for restaurants to offer immediate and long-term solutions for survival. This would eliminate the high fees of 30 to 40 percent charged by third party delivery vendors like Uber Eats and Grub Hub. King called this a virtual Coronado Food Court and presented that staff recommend allocating $20,000 to the Chamber of Commerce to help get restaurants signed on, build a website, promote the program, and provide on-site technology for restaurants. Irvine said the program has been used successfully all over the world including in Barcelona and Mexico. The California Restaurant Association is partnering with his company “as a way to come out of the pandemic and create communities of restaurants helping each other.” He said the program would be offered free until San Diego County moved out of the restrictive Purple Tier. The council unanimously voted to allocate the money to allow the Chamber to oversee this program. Learn more about the platform at https://more.dine.direct/, and diners can already try the new delivery systems at some local restaurants such as Clayton’s Bakery & Bistro and Clayton’s Mexican Takeout.

The mid-year 2020-21 budget update was Krueger’s final presentation. He said that there was good news because of their conservative estimating approach. The beginning fund balance was $5.5 million, with additional revenues of $1.5 million and budget adjustments of $2 million, for an ending fund balance of $5 million. Proposed budget expenditures include $2 million for the Capital Improvement Fund projects. One of those projects was the $800,000 repair of the lawn bowling green, which includes drainage, fungus removal, and replacing the surface. He projected that going forward, revenues will depend largely on the hotel industry’s recovery from the pandemic for Transient Occupancy Tax (TOT).

For the two Public Hearings, the first was a resolution finding Demcon Concrete Construction Inc. in default of contract for the Community Center HVAC water line replacement project, which was continued to the January 19 Council meeting. The second was for a zoning standard exception for 1135 Loma, which was unanimously approved by the council.

The council also voted on their designated representative roles on local and regional boards, committees, and other assignments for the upcoming year.

Walk, bike, surf, or run. If you noticed more of your neighbors outside exercising last year, it wasn’t because the gyms were closed. Almost 3,000 people committed...
Read more
Obituaries

The information below is provided weekly from the Coronado Police Department and then summarized for publication. Crimes Reported: Hit and Run on 8th Street and A...
Read more

After 48 years it’s hard to keep an event as amazing as Artisans' Alley down, and fortunately the organizers figured out a way to...
Read more
City of Coronado