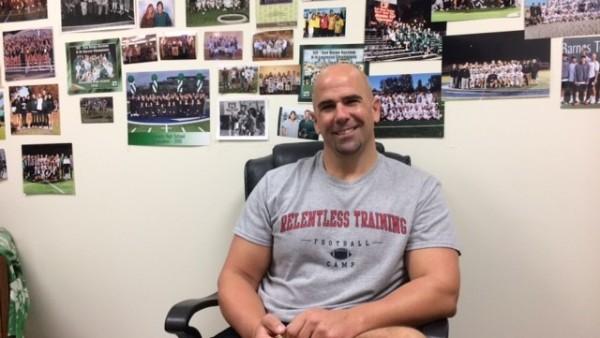 Being a head football coach is hard enough. It requires immense patience, care, intelligence, and the ability to understand and work with many different personalities.  Under normal circumstances, it’s a job that few can do at a high level. But throw in a global pandemic, and it becomes that much more difficult. And no one would know that better than 3rd-year Islanders head coach Kurt Hines; who for the last two months has had his abilities as a coach challenged in ways that they have never been before.

“Things have completely changed for me over the last few months; it’s the most unique situation that I have encountered in my 22 years of coaching football,” said Hines. “My daily routine is so much different than it was this time last year.”

As many have become aware of, the 2020 Islanders football season has been pushed back due to the continued spread and concerns of COVID-19. But it’s clear when practices and games are able to resume that things will look much different. CHS and all schools in southern California will have to abide by the strict rules set by the California Interscholastic Federation, or as it’s better known, CIF. In their mandates it states: No sharing of anything; individual drills requiring the use of athletic equipment is allowed, but the equipment should be cleaned before use by the next individual; and physical contact such as high-fives, fist/chest bumps, and hugs won’t be allowed.

“Obviously, it’s an adjustment when we are able to take the field together again, but it’s certainly a challenge that my staff and I are excited to take on. And there’s still so much that is up in there air. We don’t know if fans and parents will be allowed to attend games; we don’t even know if we will be allowed to travel as a team together or if that will have to be done independently.”

For Hines, an early challenge of this COVID delay has involved trying to find a balance for his team’s workload. “One thing I wanted to make sure of was that I didn’t burn anyone out. I wanted to make sure we were keeping our guys sharp without being overbearing. I’ve heard of other schools that tried to go full bore through this delay, and what I’m hearing is that their players were burned out and less motivated. And that’s something I wanted to avoid and think we accomplished.”

Through all of the new changes, one thing has become evident for Coach Hines: that his role and importance off the field has never been more critical. “For me, the best thing that I can do as a coach right now is to be there for these kids. Every day I remind my coaches to be there for these guys and do your best to reach out to them. The last thing I want any of my players to feel right now is stress.”

For Hines, being a player-first coach isn’t new. He’s prided himself over the years of always putting players first. “I’ve always wanted my players to know that I genuinely care for them. I’ll do anything for these guys.“

Few know what the 2020 Islanders season has in store, but it’s clear what Coach Hines expects this season. When I asked, his answer was simple, “For me and my coaching staff, our goals go far beyond what the scoreboard says. We want our players to walk as better men.

Related Video and Article: Coach Kurt Hines Shares the “Power of Why”

If you haven’t been paying attention to the 2021 Islanders girls' soccer team, it may be time to tune in. The girls in green...
Read more
Education

The Islanders men’s basketball team looked to get back on track this week after suffering two one-possession losses last week. After picking up two...
Read more
Sports

Coronado Islanders' week three matchup vs. Hoover would be best described as a mismatch, and it would not take long to see why.Coronado would...
Read more
Sports

On March 26, the Coronado Islanders football team played a game under the lights at Niedermeyer Field in what seemed like the first time...
Read more
Advertisement
Sponsored Partner Links