Unidentified adult male stole an unlocked and unattended bicycle from the location. The bicycle was valued at $300.

Suspect stole retail merchandise while inside the victim’s business. An employee witnessed the theft and identified the suspect using their local database and the suspect’s personal check.

Police were called regarding a road rage incident. Upon arrival in the area, where the vehicles involved were last seen, both parties were located still at the scene. The suspect, who saw the officer in full uniform, ignored commands to stop his vehicle so that the officer could investigate the incident, and then fled the scene.

Unknown suspect used the victim’s prescription pad to forge a prescription in an attempt to obtain medication.

1/6/19: Giving False Information to Police Officer – Misdemeanor near 300 block of I Avenue

1/5/19: Driving Under the Influence of Alcohol – Misdemeanor near 1000 block of First Street

1/4/19: Driving With Willful Disregard for Safety – Felony near 1500 block of Fourth Street 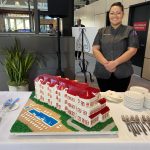