Lamb’s Players Theatre announced that it will bring back its hit production of SMOKE ON THE MOUNTAIN for a 3-week run, January 11 – 28.

The joyous bluegrass gospel celebration was the closing show of the theatre’s 2017 Season. “We had to close it for our annual FESTIVAL OF CHRISTMAS in December,” said LAMB’S Producing Artistic Director, “But we have some time in January before our 2018 Season starts in February, so we’re bringing it back. Audiences just can’t get enough of it.”

The musical will run Wednesday thru Sunday at Lamb’s Players Theatre, 1142 Orange Ave in Coronado. Tickets start at only $28.

SMOKE ON THE MOUNTAIN 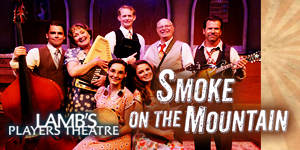 The show runs just over 2 hours, including an Intermission. It is a great show for the whole family.

Harlem Duet Explodes on Stage in Vivid Tale of Racial Identity Through the Eyes of a Romance Gone WrongIf you love and miss the...
Read more
Stage

$10 off tickets for Coronado residents for any performance in September The gorgeous Irish musical ONCE has been San Diego’s biggest summer hit! Extended Again &...
Read more
Stage

Here we go again! Lamb's extends “Once, The Musical” through September 16.Lamb’s Players Theatre announced today that it is - once again - extending the...
Read more
Stage

Get $10 off any performance of Once if you purchase by midnight, Friday, May 25. Use code EARLY10 at checkout online or call the...
Read more
Advertisement
Sponsored Partner Links