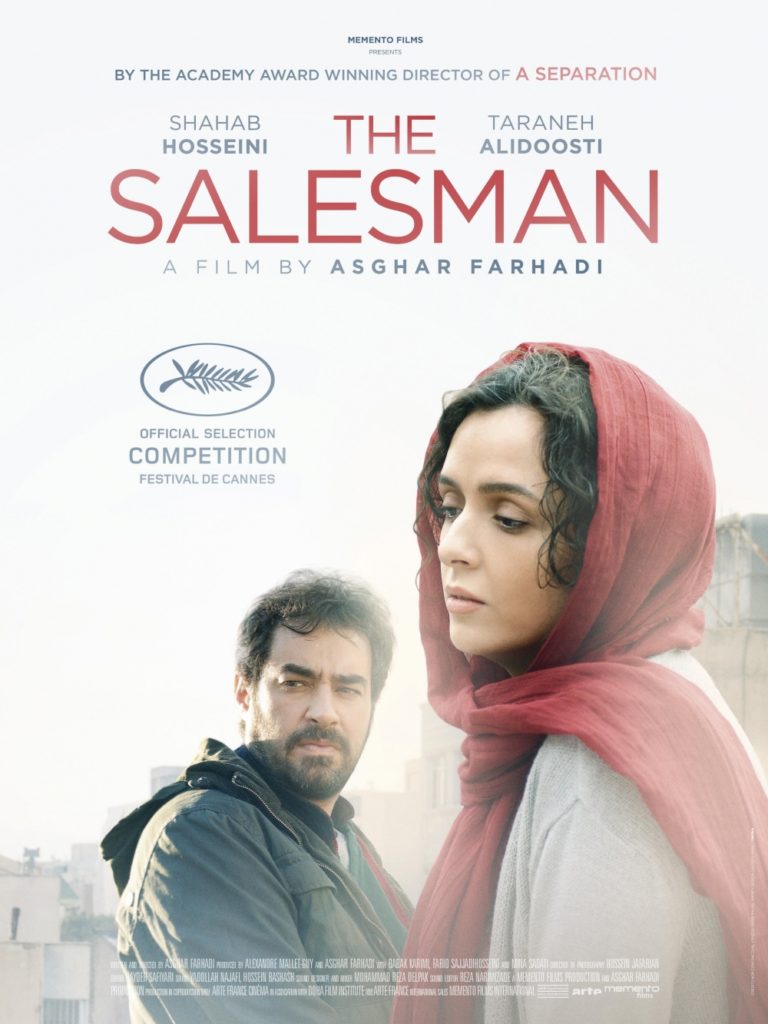 Our little Village Theatre in Coronado doesn’t get many foreign films, perhaps because few have caused such a sensation in recent years as The Salesman. Before seeing the movie, I noticed it had a Rotten Tomatoes rating of 97% and many Festival de Cannes awards, but otherwise I deliberately avoided reading anything about it. What made it so good?

From the start, the story drew me in with its pure normalcy. The Salesman is an Iranian film, and it is entirely in Arabic with English subtitles. Especially in this day and age, there could be a lot to separate an American from understanding or appreciating this type of movie. Yet the brilliant director and actor Asghar Farhadi stepped over many barriers with the plot: Emad and Rana, a young couple, are forced to evacuate their apartment due to structural issues and, desperate to find a place, they move into another apartment temporarily that a coworker offers to them free of charge.

This is when things get complicated, though, and surprisingly creepy. The new apartment isn’t empty. The former tenant left behind a locked bedroom full of belongings, including a lot of children’s toys. Multiple attempts to contact the woman lead nowhere. Emad and Rana first move the woman’s things outside, then back inside. The suspense builds for the audience — will the woman come and discover what they have done? Will she be angry?

And then one night Rana comes home alone, and she leaves the door open for Emad while she showers. When Emad returns, Rana is not there, and there is blood on the stairs. What horrible event happened? Who came into the apartment? And why?

Much of the brilliance of the movie came from the tension of the unspoken. For instance, director Asghar Farhadi focused the camera in tighter on faces and upper bodies than most Hollywood directors, leading to mystery and fear about what lay below the view of the camera, at the actors’ feet.

The sequence of events also was not what I expected, and scenes cut dramatically from one to the next without the warnings and clues we are accustomed to from Hollywood. There is also so much tension about the unknown and, in a Muslim culture, the unsaid and unspoken. In one sequence, there are multiple scenes involving a pickup truck with a canvas cover over the bed of the truck. No one ever looks inside the cover, and the audience is tense with terror that someone or something is hiding inside.

Emad and Rana are actors in the play The Death of a Salesman in a local theater, and in the movie there is also a lot of shifting back and forth between the stage and reality. At many points, the lines in the play bring out the actors’ true feelings; acting reveals the truth. At the same time, when Emad and Rana interact with each other, they often act or hide the truth from each other, unwilling to face reality and its consequences. There is so much power in what is unsaid.

My husband Elliott watched the movie with me, and he gave it five stars. As we walked home afterwards, he said, “It is especially powerful how this film humanizes Muslims. The movie shows a particular culture and story in Iran, one part of the land mass of ‘the Middle East’ that many Americans don’t know much about. In the movie, we meet Muslims that we can sympathize with and understand.”

The film began with a collapsing building, but the building stands longer than the actors or the audience expected, and might continue to hold up forever even with huge cracks in the walls. That building is a powerful metaphor. When Emad locks the door and leaves the building for the last time at the end of the movie, has he left their brokenness in the past, too? Has justice been done? Is everyone finally free? That is up to you to decide.

The brilliant direction of a quiet family drama that turns into a story of revenge and forgiveness, the raw talent of the understated actors who bring the story to life, the universally understandable plot and dramatic resolution — all of this makes The Salesman an unexpected but memorable new favorite. Highly recommend!

Lights sparkled on the bay from Bluewater Boathouse when my husband and I walked up at sunset Tuesday night. There is no more picturesque...
Read more
Stage