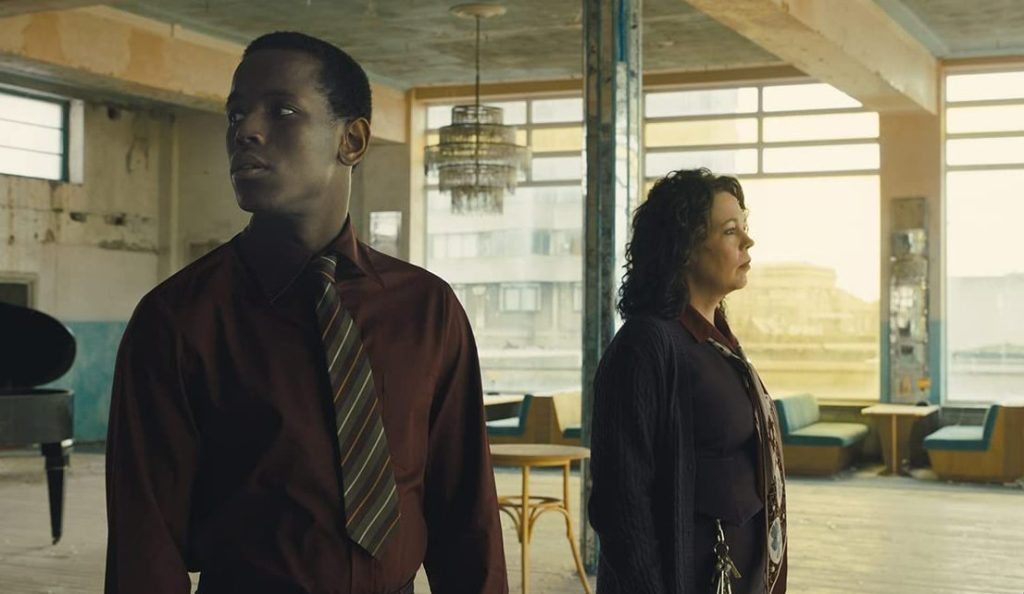 The importance of human connections was beautifully woven throughout the new film “Empire of Light,” starring Academy Award winning actors Olivia Colman and Colin Firth, shown at the Coronado Island Film Festival (CIFF). The film showcases racism, mental illness, and the power of the cinema. As we were munching our delicious buttered popcorn, the opening scene flashed a popcorn machine in the retro Empire movie theater in an English coastal town, not dissimilar to Coronado’s Vintage Theatre, albeit grander in its day with two curving staircases gracing the foyer. 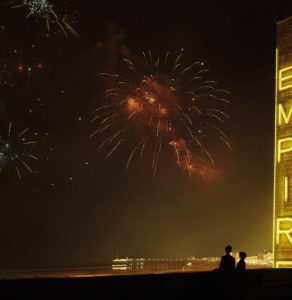 Olivia Colman perfectly captures the plight of Cinema Duty Manager Hilary as she draws you into her ill-at-ease world. Newcomer Micheal Ward is a standout Jamaican-British actor who embodies Stephen, the new ticket taker facing his own difficulties. The two come together, through different adversities, and come out on the other side with the quiet support of their co-workers, and their shared experiences of music, cinema, and racial adversity. Especially poignant is the scene, on the top empty theater floor, where Hilary and Stephen rescue an injured bird, bandaging his wing, and taking care of him until he can once again fly. Their not-so-secret affair gives them both a reason for them to grow, as their quirky co-workers provide the backdrop for the support system they need.

Hilary recites Tennison on the roof, before they kiss during the New Year’s fireworks. Her mood lightens considerably as their relationship deepens. The unlikely couple even travel to the beach, on a quintessential double-decker red bus, and enjoy a lovely day until Hilary’s mood shifts and her schizophrenia emerges after she has gone off her lithium.

The introduction for this film by CIFF Executive Director Merridee Book and CIFF Founder Doug St. Denis promised that the audience would “hate Colin Firth’s character,” and they were not wrong. Firth plays Mr. Ellis, the austere, lecherous cinema manager who takes advantage of Hilary, and he has no redeeming qualities. The film is set in 1981 and the small theater gets its big break when it gets to host the premiere of “Chariots of Fire.”

An interesting component of the film is through the eyes of Steven as he learns how movies are made by creating light, and convinces Hilary to finally sit and watch a movie to truly experience the wonder of cinema and how it gives a broader perspective of life.

We were surprised at the degree of racial tension which still existed in England. After Stephen recovers from a brutal attack at the cinema, he is finally headed to college through the encouragement of Hilary, telling her, “Here’s to the future and getting back up,” a message which resonates with both of them, especially after her mental break, when she is taken away by the police and social services. In the end, she gives him the meaningful poetry book “High Windows,” and a final hug goodbye as a thank you for his impact on her life.

The cinematography is beautifully done and sets the tone for this poignant film as the audience is pulled into the cruel world of racism and mental illness, but still offers hope through the power of friendship and cinema. The soundtrack throughout helps to enliven the mood of the somber subjects and is well-written, directed, and produced by Academy Award-winning director Sam Mendes, known for films like “1917” and “Skyfall.” This is his first foray into the combination of writing and directing and his style shines in this production. The movie is considered a romance drama, but we felt it was a deep introspection of some complexities of life and is rated R for violence, sexual content, and language.