“Music gives a soul to the universe, wings to the mind, flight to the imagination and life to everything.” ― Plato

Art enthusiasts, festival lovers, concert-goers, and anyone who loves a good party should mark their calendars: the first-ever Coronado Music Festival is coming to the Crown City the weekend of Friday, September 20th through Sunday, September 22nd.

As detailed on the home page of the Coronado Music Festival’s official website: 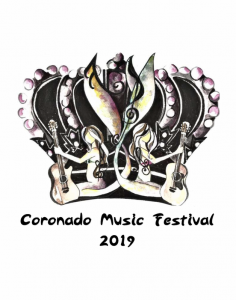 The Coronado Music Festival (CMF) is a three-day, family-friendly, FREE Music Festival in Coronado CA, featuring local and regional musical talent of all genres and visual art. The Music Festival is the first event for Coronado Music and Arts Foundation (CMAF), a nonprofit, whose mission is to provide cultural music and art experiences for at-risk and homeless individuals including youth and special needs adults through a variety of settings in Coronado and San Diego.

Co-founders Penny Rothschild, owner of Emerald C Gallery, and novelist Jennifer Franks, both artists in their own right, conceived of the Coronado Music Festival following the success of monthly open mic nights hosted at Emerald C Gallery which feature a wide range of talents.

“One night about eight months ago after open mic night, Jennifer and I agreed that Coronado was missing an opportunity by not having a music festival,” explains Penny. “We are proud of the ongoing installation of public art works in our city and of course the successful Coronado Island Film Festival, but for Coronado to truly be regarded as a cultural art destination, there needs to be a music festival.”

So, Penny and Jennifer decided to create the Coronado Music Festival as a celebration of talent in all genres – both in music and other art forms.

“In addition to music, we will have public art installations with staging for photo opportunities,” says Penny. “There will be performing artists, chalk artists, and others. The list of talent for this event continues to grow.”

Penny and Jennifer are purposeful about creating an event that will draw a crowd from well beyond the 92118. The Coronado Music Festival motto of ‘bridging the cultural experience’ offers a strategic play-on-words to emphasize Coronado’s proximity to Greater San Diego and position the peninsula as a venue worth ‘traveling overseas’ for. 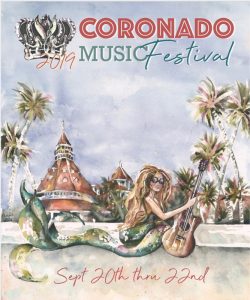 Franks and Rothschild looked to other models when considering the viability of a music festival, and referenced SoCal destination music festivals like Kaboo in Del Mar, The Ohana Festival in Dana Point, and of course – Coachella Valley’s Stagecoach and Coachella festivals to name just a few. Ticket prices for those festivals start at over $100 a ticket and escalate into the thousands of dollars range. The Coronado Music Festival distinguishes itself in its mission to remain free to the public.

“For our inaugural year, this event is FREE. There will be VIP tickets for purchase, but otherwise, we want this to be a family-friendly event that is open to the public. We want to encourage people to come to Coronado to enjoy our city and local businesses, and of course – high caliber entertainment and art production.”

The event will kick off Friday at Emerald C Gallery, and will feature in venues throughout the weekend including Mexican Village, The Coronado Historical Association, The Coronado Performing Arts Center, and the Coronado Ferry landing – another first for Coronado.

“We will be the first to have a concert at the Ferry Landing,” says Rothschild. “There will be multiple stages and performances, all with the backdrop of the downtown San Diego skyline. It’s going to be like nothing Coronado has ever seen.”

For more information on the Coronado Music Festival, including sponsorship and advertising opportunities visit www.coronadomusicfestival.com.