Over 430 and counting. That’s how many lives have been lost from atop the San Diego- Coronado Bridge. Over the span of 50 years, that’s an average of about nine people per year that die by suicide from this iconic landmark. This makes the Coronado bridge the second most frequently used bridge for suicide in the United States. With this staggering number exponentially growing, it’s an issue that can no longer be ignored. Change is needed and that’s exactly what California Senator Ben Hueso and Coronado Mayor Richard Bailey plan to bring to this issue. 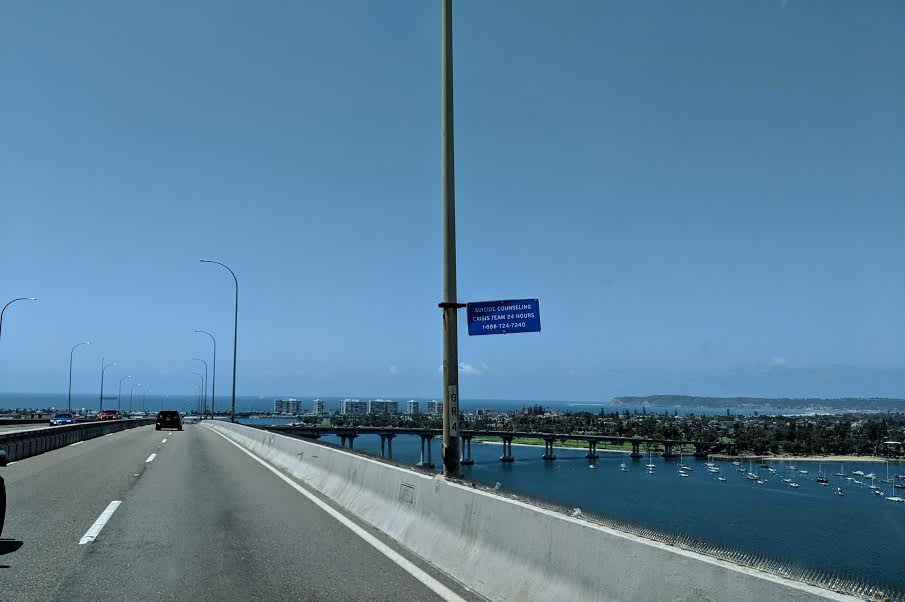 On May 17, Senator Hueso, Mayor Bailey, Bertha Loaiza and members of the Coronado San Diego Bridge Collaborative for Suicide Prevention held a press conference in Chicano Park. The purpose of the conference was to bring awareness to, and draw support for, Senate Bill No. 656. This bill, which is expected to be voted on by the full state senate this week, shall establish a committee to assist in the selection of a new suicide deterrent system for the bridge.

“It’s about time that we do something about this,” opened Senator Hueso at the podium. “It’s been a year (since the first proposed suicide barrier) and there are still nine options on the table ranging from $25M to $130M falling on the state when it comes to funding.” While potential ideas have been put into motion to deter suicides, the most recent one involving the installation of bird spikes has been proven to be ineffective. “Since the bird spikes were installed we have seen seven suicides…it sends a pretty clear message that they are not succeeding in their purpose,” acknowledges Senator Hueso.

It was also acknowledged that the Coronado Bridge is a major component to our community’s transportation infrastructure. “80,000 vehicles cross this bridge every day,” pointed out Senator Hueso. He continued, “why hasn’t something been done?” Senator Hueso later adds, “we’re not satisfied at which the pace of this process has been moving. We need the state to fulfill its obligation to ensure the Coronado Bridge continues to perform its function transporting people.” The ultimate goal is to reach a decision that not only leads to serving a community’s infrastructure needs, but one that also succeeds in deterring suicides in the future.

Mayor Richard Bailey echoed the words of Senator Hueso when he passionately asked for the state’s support of SB 656. “This issue is bigger than just those two cities (San Diego and Coronado)…this is both a transportation and also a mental health issue that can be solved,” claimed Mayor Bailey. He then noted, “many of those cars carry the men and women that serve in the US Navy,”, as he acknowledged the bridge as the primary means of Coronado’s transportation infrastructure. Mayor Bailey then asserted, “there is ample research within the mental health field that shows when you can eliminate an impulsive suicide outlet, such as a bridge, suicide rates throughout the region will fall. I think it will be a win win to do this.”

Suicide prevention is still the top priority when it comes to SB 656. This could not be stressed enough by Bertha Loaiza, a bridge jump survivor. “My mother took her life from this bridge and she was holding me in her arms when she did so,” revealed Bertha. She was only three years old when her mother chose to end their lives. Bertha now serves on the board of directors for Survivors of Suicide Loss. She agreed with Senator Hueso and Mayor Bailey. Loaiza stated, “seeing some physical deterrents on this bridge will bring me some peace because I know it will give us more time to help. It’s going to bring a lot of peace, support, help, and faith to these families.”

Whether we agree or not on the motivating factor behind suicide barriers, surely we can agree that they are needed. Will barriers completely eradicate traffic issues on the bridge? No. Will barriers completely eliminate suicides within San Diego County? Of course not. What they will do, however, is eliminate the bridge as an impulsive suicide location. This will provide valuable time for loved ones to possibly intervene while simultaneously preventing commuters from witnessing such tragedies. Barriers will happen and our government isn’t backing down. Senator Hueso closed with, “This is all of our bridge [sic]. This belongs to all of us. We cannot go another 40 years looking at potentially another 400 lives lost. We need to do something and I intend to do something about it.”

Kyle McCarty
During his 13 years as a Naval Aviation Rescue Swimmer, Kyle’s naval career brought him to NAS North Island in 2008 in which he eventually moved to Coronado in 2014. Although originally from Texas, he now considers Coronado to be home after his retirement in 2015. Kyle is a Communication major with a passion for writing, teaching, helping others, and public speaking. In his free time, he enjoys coaching baseball, game nights, his Jeep, and camping with his family. Have news to share? Send tips, story ideas or letters to the editor to: manager@coronadotimes.com

A VA home loan is a $0-down mortgage option that is issued by private lenders and partially backed by the Department of Veterans Affairs...
Read more
City of Coronado

Presiding over the first Board of Port Commissioners meeting of the year and a Board that includes two new commissioners, Michael Zucchet has begun...
Read more
Advertisement
Advertise Here (Get Rates)