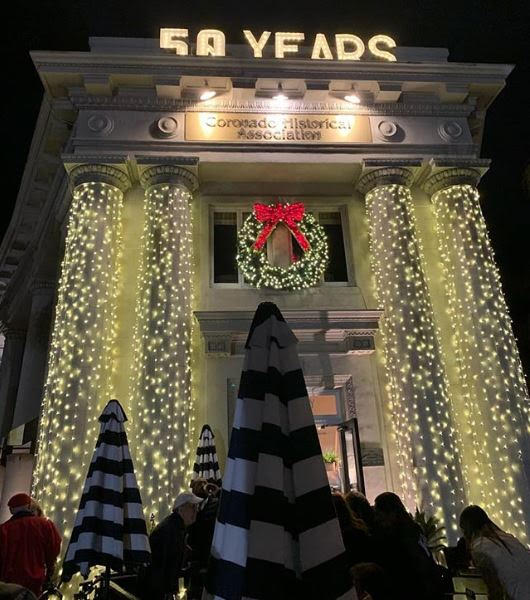 Notice anything different around town lately? If you’ve traveled down Orange near Tenth during the evening hours this past week, we hope you didn’t miss the lights on the Coronado Historical Association building at 1100 Orange Ave. As beautiful as they look, they actually serve as an important milestone for the organization. The Coronado Historical Association is turning 50 and 2019 will be the year to celebrate.

For those not familiar with the organization’s background, here’s a quick history:

The Coronado Historical Association’s story began with one of San Diego’s biggest projects, and for many of Coronado’s residents, one of the most controversial. Years in development, the San Diego-Coronado Bridge was set to open in 1969 and many local residents worried that Coronado’s tight-knit community would disappear because of it. Led by Bunny MacKenzie, Katherine Carlin, and others, a group of concerned citizens rallied to save the last of the soon to be retired ferry boats, which for decades had been the only way to and from Coronado.

Their goal proved to be futile, but they gained a spotlight in the community as the caretakers of Coronado’s history. With that momentum, they established the Coronado Historical Association, which was incorporated on February 7th, 1969. With the original goal of saving the ferry beyond reach, the Association took on an activist posture, vigorously seeking artifacts, records, photos, and remembrances of Coronado’s past. In turn, the City, recognizing the Association’s efforts, set them up with their first official location in a small bungalow on the corner of 7th and Orange known as Babcock Court, which today serves as the Coronado Police Headquarters.

Through exhibitions, lectures, and Christmas Home Tours, the Association grew in membership, collections, and prestige. Soon, CHA ranked as one of the largest of its kind in California relative to the size of its community. It was an organization of volunteers, built on the strength of a community proud of its past.

In 1987, the CHA Board of Directors approved the purchase of 1126 Loma Avenue to be the first-ever permanent home of the Museum and house the archives of the Association.

During the next 12 years of collecting and preserving Coronado’s history, the Association’s collection outgrew the historic house on Loma Avenue and in 1999, CHA relocated to the historic bank building at 1100 Orange Avenue.

The building, which turned 100 years old in 2011, received a historic designation from the Coronado Historic Resource Commission—the first ever by the Commission for a commercial building in Coronado.

The move to the new building resulted in two changes. First was the creation of the Museum of History & Art, which opened to the public in October of 2000 with three exhibit galleries, a research library, state-of-the-art Archives, a Museum Store, the Tent City restaurant and the Coronado Visitor Center. The other change was to the staff. An all-volunteer organization was a good fit for community activism and pride, but with the ever growing collections it was realized that a professional curator was needed. As such CHA shifted from an all-volunteer organization, to a volunteer Board with a professional staff overseeing museum and curatorial duties.

Today, the current museum features both permanent and changing exhibits, including a collection of over 22,000 photographs, 1,500 artifacts, and thousands of archival documents. The research library serves as the premier destination for local historians and citizens. In addition, monthly adult and youth programs presented in the Museum’s Lecture Hall, continue to identify ways to creatively tell the history of Coronado and the surrounding community.

For 50 years the Coronado Historical Association has been serving the community of Coronado. This incredible resource is here for all to enjoy. If you have never been by the Museum (currently featuring an exhibit on film in Coronado, including Marilyn Monroe), or attended one of the monthly lectures, youth programs or research opportunities, you should do so, and while you are there, become a member of the Coronado Historical Association and help write the story for the next 50 years.

IT'S NEVER 2L8, a Coronado local band, got creative this 4th of July to help Coronado celebrate the busiest day of the year. The...
Read more
Education

On the 4th of July holiday, San Diego Humane Society’s Project Wildlife admitted a bald eagle, the national bird of the United States of...
Read more

Have a treasure just waiting to be discovered? Wondering about Grandma's ring, or that antique chair you found at a garage...
Read more
Uncategorized

'Story of the San Salvador--Past & Present' Ray Ashley, Executive Director of the Maritime Museum of San Diego, will discuss the...
Read more
Uncategorized

My Coronado Memory — ‘Summer Days at the Beach’

Summer Days at the Beach By Bruce HB Johnson I chose my parents wisely, so I could be born and raised in Coronado. My...
Read more

My Coronado Memory – ‘We Walk Among Heroes…’

Walking on Coronado Beach early one morning with Capt. Al Waldman, USNR, by now in his 80's, who always proudly wore his...
Read more
Advertisement
Advertise Here (Get Rates)