The buzz began this weekend in Coronado: Lobster West, the authentic Maine lobster restaurant in Encinitas, announced that it will be opening a new location at 1033 B Ave in Coronado. The restaurant will take the place of former Cupcake Store & More near the Coronado Post Office.

“We’re planning to open in late March or early April 2016 at the latest,” says Jenny Gilcrest, PR representative for Lobster West. “We’re working on some ideas to introduce the restaurant to the local community — including a locals’ night and a media event — but we haven’t decided what that will look like yet. We know that Coronado is a really tight community, so we’re also hoping to offer some ongoing specials and deals to locals.”

The restaurant opened in Summer 2013 in Encinitas, and it quickly became popular in the local San Diego community. “Lobster West is absolutely fantastic,” says a local Coronado fan. “We drive up there every few months just to have a lobster roll done right.”

“Lobster West is a traditional New-England style concept,” explains Jenny Gilcrest. “It’s a very beloved East Coast food that we are bringing to the West Coast, and introducing it to people who aren’t as familiar. We’ve been successful in Encinitas because people enjoy seafood, and we think Coronado fits with that because it’s coastal, and it can be a fun neighborhood spot as well as a unique tourist spot.”

She also referenced the large amount of East Coast natives in Coronado that might be looking for or missing authentic New England lobster rolls. “Especially because Coronado is a military town, there are a lot of transplants from the East Coast, and there haven’t been a lot of places that do lobster rolls authentically like they do in New England. I think our authenticity is what makes Lobster West unique: we fly the lobster in from Maine, we focus on the lobster meat, our rolls don’t have a lot of additives like mayo, and we let the lobster shine.”
Lobster West’s menu is simple and hearty, with two styles of lobster rolls (Maine or Connecticut), as well as crab rolls, shrimp rolls, seafood chowders, locally-grown organic salads, and sides of chips and coleslaw. The drinks include Organic Maine Root Soda and and freshly brewed iced tea, as well as beer and wine. The lobster are sustainably fished in Maine and flown overnight to ensure freshness, and the restaurant sources local ingredients and organic produce whenever possible.

Why did Lobster West choose this location in Coronado? Jenny says they wanted to be close to the Del and in the middle of things, but mostly they were excited to come to Coronado, knowing it is a small, tight-knit community. Lobster West is eager to move into other neighborhoods after Encinitas, but Coronado was their top pick for their second location.

“We may come up with some special delivery options for locals in Coronado,” says Jenny, “but we haven’t figured that out specifically yet. It’s going to depend on demand. Lobster West is a small, family-owned business, so they will be open to suggestions.”

If the buzz on local Coronado Facebook pages is any indication, Coronado will be ready to welcome the New England-style restaurant with true Southern California warmth in a couple of months. Until then, the Encinitas location is open for lunch and dinner, online orders, and catering, and their website includes more information about their sustainable lobster fishing practices and mouth-watering menu options. 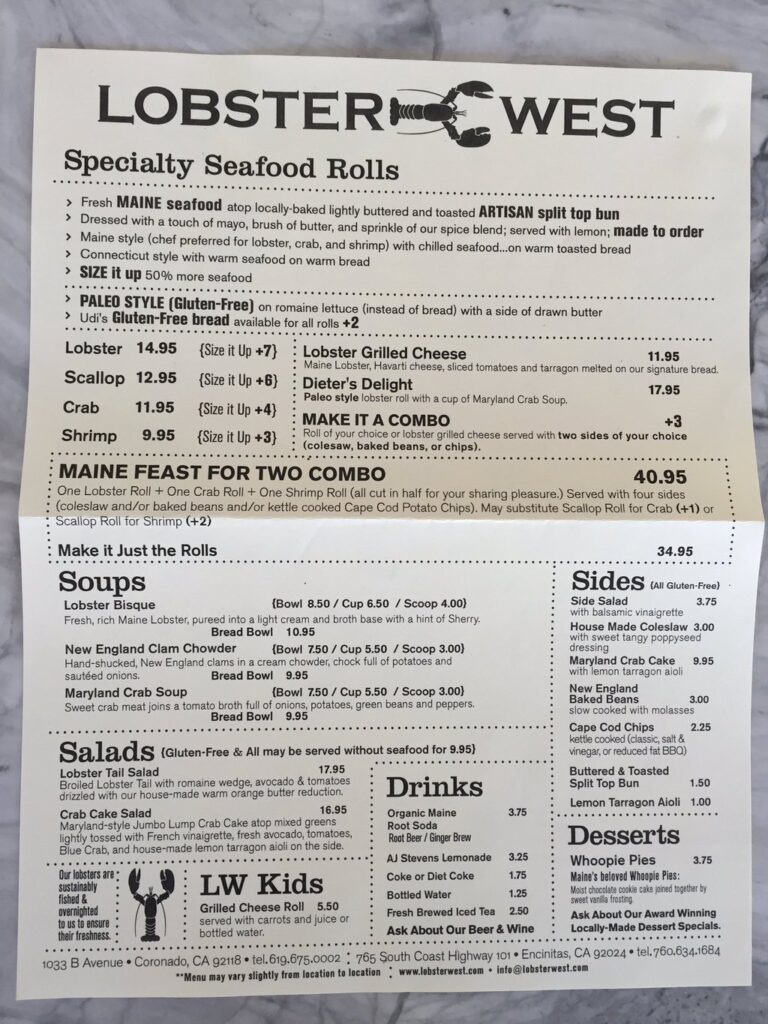