The 1887 Boat House continues to thumb its nose at Mother Nature. After almost 130 years of sitting on wooden pilings in Glorietta Bay, over the water, the historic structure is as sound as ever.

Throughout December the winter tides did their best to challenge her. At the peak of king tides the building, now Bluewater Boathouse Seafood Grill, appeared to be a large ship floating in the bay – sea water mere inches from the floor.

At minus low tides, it seemed as though you could ride a bicycle between the pilings as the structure’s footings were completely exposed.

Most everyone knows the old Boat House’s history by now. She was built in 1887 as a template for workers to practice on before constructing the actual Hotel del Coronado, which, they built in 1888, and in under a year.

It would serve as home to numerous families and boat masters, it was the first headquarters for a fledgling Scripps Institution of Oceanography, served as home to more than one yacht club, and in general was a Coronado icon from day one. Today, only the Hotel del Coronado is photographed more, or the subject of more artistic renderings.

Buzzy Bent and Ron Smith, strong players in the early Chart House years, were more than familiar with the old Coronado Boat House. They had swum and sailed around her for years, and trained in those waters when they were active as UDT (Underwater Demolition Team). The UDT was a precursor to today’s Navy SEALs, who continue to call the bay their home.

When Bent and Smith went to look at the Boat House with the idea of making her into a Chart House, the building sat 80 feet out into the bay and sagged just about everywhere. The bottom floor was flooded with seawater and an old surfboard hung by its fin, swinging to and fro like a clock pendulum. It hadn’t actually rented boats for years, despite the signage.

The building was owned by the City of Coronado but Larry Lawrence, controversial owner of the Hotel del Coronado, had a long-term lease on the structure.

Bent and Smith talked him into a deal that required Lawrence to be responsible for the structural integrity of the building, including the pilings it sat on. Kicking and screaming, Lawrence went along with the proposal.

When the City Council refused to give the Chart House a permit until the foundation was repaired, all parties agreed to sink new pilings closer to shore, and put a platform on top that was 18 inches higher than the highest tide. Lawrence then paid to have the old structure slowly raised, floated and lifted up onto its new legs.

Lawrence paid a small fortune to replenish the “structural integrity” of the Boat House. Bent and Smith paid $200,000 to restore the interior and create one of the finest restaurants in San Diego history.

Smith did most of the work to ready the restaurant. Old UDT buddy John Callahan joined their group and became the Coronado Chart House’s first manager.

During construction, a water heater no one realized was functional kicked on and ignited fumes from the cans of lacquer thinner, used paint and varnish carelessly scattered around the floor. It blew a hole through the roof of the Boat House and started little fires throughout the 1887 wooden structure. 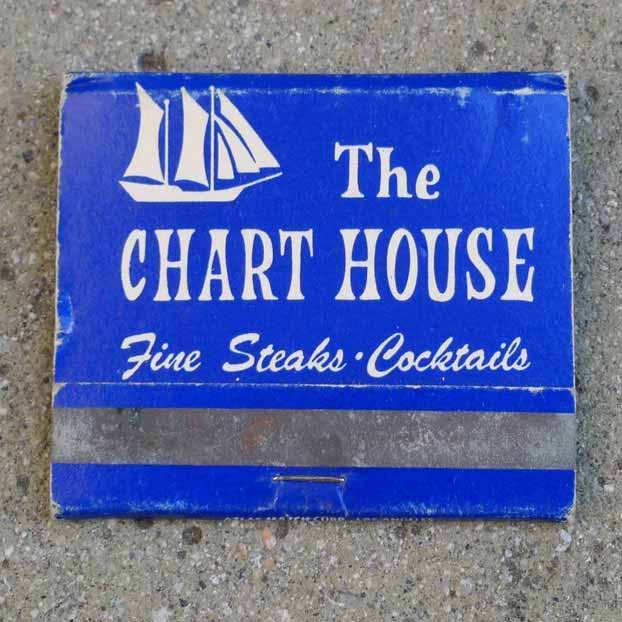 Ron Smith got there that night and the Coronado Fire Department had saved the day. But he slept in the Boat House cupola on an old mattress every night for the next four months, until they opened to the public on November 17, 1968.

The ex-frogmen didn’t just repair broken railings, moldings and window frames; they carefully researched and reproduced them, earning the title of “Victorian-Era Specialists” in the San Diego Evening Tribune.

That dedication to preserving history became the benchmark, beginning with the Coronado Chart House, of an ongoing Chart House ethic of historical preservation and correct renovation throughout the chain from that date forward.

To quote Chart House historian Mike Plant, in his management booklet, “STOKED: The Early Days of the Chart House Restaurants:”

“Buzzy didn’t just want a restaurant, a fourth Chart House, he wanted a spectacular restaurant; a restaurant equivalent of a 90-second free fall, a big day at Waimea, a crackling crisp morning in the mountains with two feet of fresh powder under your skis. And he got it.”

Today, after a succession of other restaurants, the Coronado Boat House is now the Bluewater Boathouse Seafood Grill. There are no longer handheld wooden paddles for menus, sporting outrageously low prices for oversized center cuts of steak.

But Bluewater has gone to great extremes to follow the old Chart House lead in presenting the finest food possible, sustainable seafood, a particular dedication to history and preservation, friendly service, and some of the greatest views from a dining table possible.

Coronado’s Bluewater Boathouse is located at 1701 Strand Way, across from the historic Hotel del Coronado. For more information call (619) 435-0155, or visit www.bluewatergrill.com.

You can also follow Bluewater Grill on Facebook. The restaurant is open daily from 11:30 a.m. to 9 p.m. (winter hours), serving lunch, brunch and dinner. The outside patio dining is dog friendly.

The latest Community Hero video from the Coronado Library’s Dive into Discovery Summer Reading Series. Thanks to Surf’s Up Studios for the video.https://youtu.be/ePfWJySojuk
Read more
Business