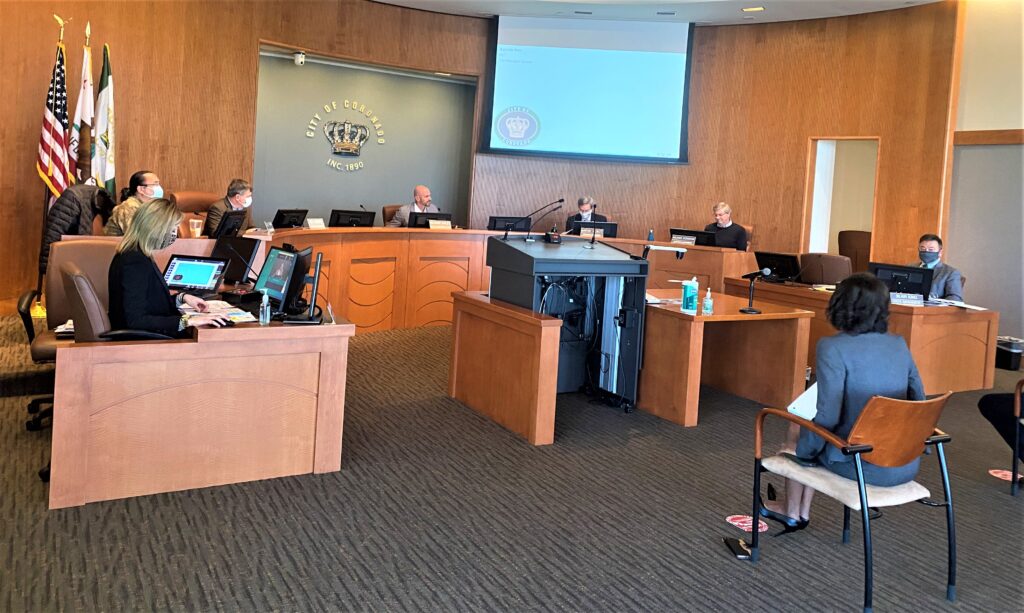 At the council meeting on March 16, City Manager Blair King announced his resignation as of April 29, and he presented flowers to his wife Nancy, who was in attendance. He has been Coronado’s City Manager for ten years and eleven months, and shared that this is his longest tenure in San Diego county. He will be heading to Bainbridge Island, Washington where he will become the new City Manager there. King highlighted a few accomplishments including major redevelopment and capital projects, helping form a Section 115 Pension Trust, as one of the state’s first, to stabilize pension rates, creating a variety of community committees, and working with the Coronado Unified School District to help facilitate an early payoff of redevelopment debt for a better fiscal future. King said he and his family will treasure their memories from Coronado. The council and audience gave King a standing ovation for his dedicated service.

Chris Lowe, PhD, Director of the Shark Lab at the California State University, Long Beach (CSULB), gave a very detailed and interesting presentation on the white shark population and habits along the California coast. He noted that there has been a five percent increase over the last 10 years on Southern California beaches. Although this does not translate into more human shark bites, it has caused more temporary beach closures, which are up over the last 10 years. When shark bites do occur, there is a lot of media buzz and the Shark Lab is currently studying the economic impacts of beach closures. His team works with lifeguards and water safety officials providing data, so they can make informed decisions on the most prudent times to close beaches for public safety. They have found that Southern California beaches are a white shark nursery habitat from April through October each year, with the hotspots in Ventura, Santa Monica, Huntington Beach, Dana Point, and San Diego. The adult sharks tend to stay closer to offshore islands. The Shark Lab Team have tagged around 110 sharks, with acoustic transmitters to track their movements, but collecting the data requires divers to pick up the 80 receivers from Morro Bay to the Mexican border, which is time consuming. New technology includes live buoys, with Fathom software, featuring GPS capabilities giving real time data. The Navy is in the process of purchasing two of these buoys, which cost approximately $14,203 plus data collection fees, to use along Silver Strand beaches.

Lowe highlighted that California is a leader in developing this new technology which allows them to better work with lifeguards to fine tune safety policies and determine when to close beaches. The Shark Lab team has spent 30 hours in Coronado and has familiarized themselves with the beaches. The councilmembers asked questions regarding using the buoys in Coronado and discovered that the buoys have a 300 yard detection, so it would take four buoys to cover the entire Coronado beach area. All the councilmembers felt the research was interesting and were positive about the program, but wondered how well it would work, since the buoys would only detect the 53 tagged sharks in the area. The final unanimous vote was a motion to put purchasing the buoys in the lifeguard budget for the upcoming year and then make a final decision at that time. For more information, check out Shark Lab at www.csulb.edu/shark-lab.

Associate Planner Howard Lee presented the Climate Action Plan (CAP), which King characterized as an aspirational, but not mandatory document. In August 2020, the council received an update on the greenhouse gas (GHG) emissions forecast and inventory. In October, the city established Comment Coronado so the public could provide comments, and also held a virtual workshop with 40 attendees.

With 43 percent of GHG coming from building and an additional 43 percent from transportation, those are the emphasis for helping reduce the environmental footprint in Coronado. When asked, Lee specified that the Navy vehicles’ trips were not included in the CAP calculations. Coronado is doing a good job at reducing its GHG, but the council is committed to doing even more and encourages residents to all help by doing their part.

Lee detailed the four options for the CAP that were developed in conjunction with Jones and Stokes Consulting. Several residents and groups sent in public comments, and the Climate Advisory Group, Climate Action Campaign, and Circulate San Diego weighed in via Zoom advocating for Option A, with the council unanimously approving Option A — with the 2030 reduction goals, and a wait-to-see state 2022 goals before committing to 2045 reduction goals, with the caveat of staff bringing back greater details on some of the proposed items of which the council are unfamiliar. Next steps for the CAP are to release a draft for public review in May, hold a public workshop in June, and then bring it back to city council to adopt in September.

The council unanimously approved a two-unit, two-story condominium project at 941-943 F Avenue, after a presentation by Associate Planner Marisa Smith. The former residence was deemed non historic and demolished, with the project recommended for approval from the Planning Commission.

Smith also presented an appeal to require off-street parking for an Accessory Dwelling Unit (ADU) at 36 Bahama Bend in the Coronado Cays. While the city initially denied the resident’s request, due to not complying with ADU off-street parking requirements, the resident resubmitted amended plans with a parking place located at the side of the house, which met with city approval. The resident, her attorney, and two neighbors spoke via Zoom during the meeting, citing that the ADU parking ordinance should not be blanketly applied and should be considered for individual circumstances. The issue of California Coastal Act requirements and available nearby public transportation were discussed, as well as the issue of taking away a public parking space to create a private one requiring a curb cut. One public comment supporting denial was also received. After discussion, the appeal was unanimously denied by council.

The Bayshore Bikeway etiquette signage project was approved to go to the Port on the consent calendar. Councilmember Heinze noted that there were more than 175 stencils called out along the strand portion of the bikeway and he asked city staff to re-look at the plan and potentially reduce that number due to higher speeds of bikes and lower congestion. Since the beginning of the pandemic last year, the Bikeway has seen a significant rise in usage. There have been several accidents and city staff have been working with the Mobility Commission to develop stencil design concepts to promote safe and courteous behavior. 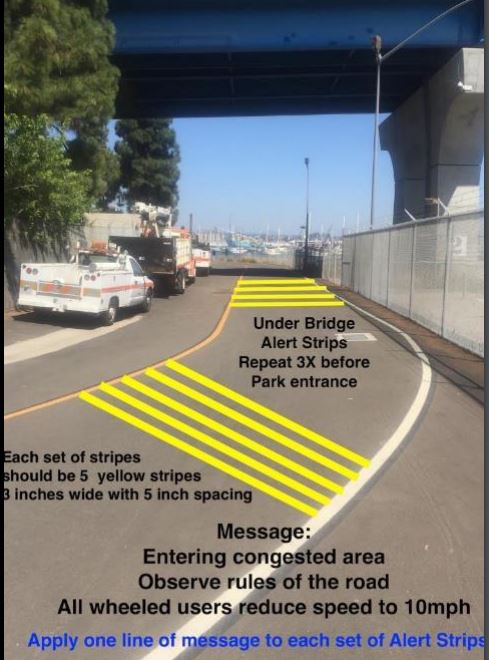