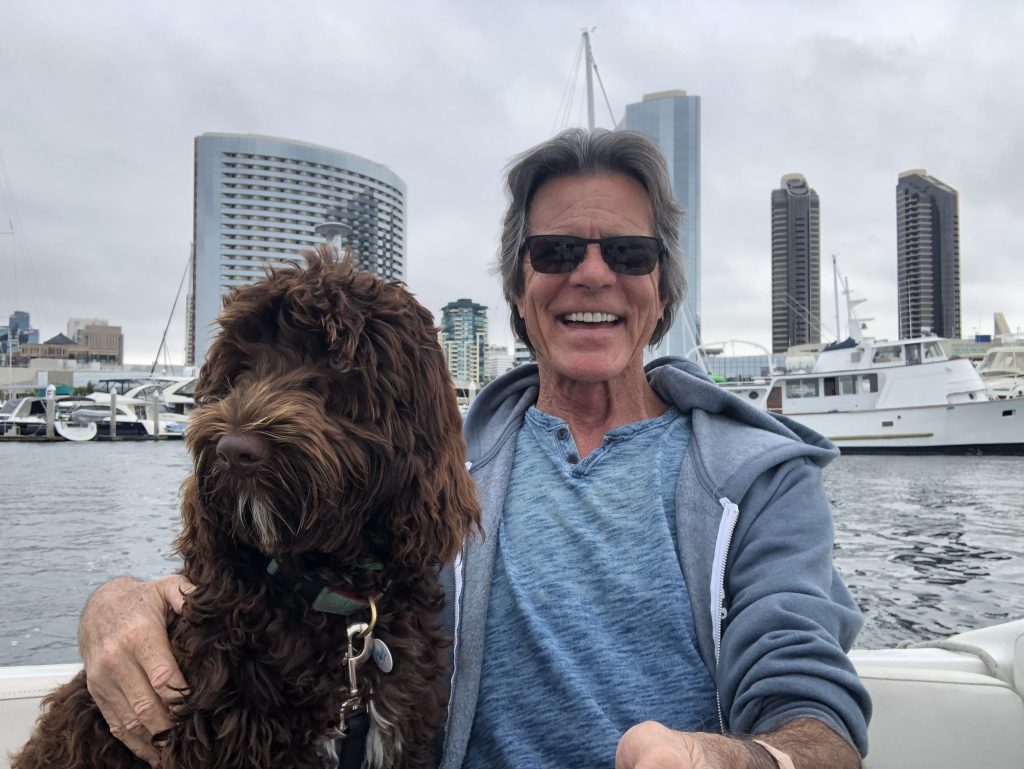 If a younger Brad Willis could have pictured his life at 70, his quest to highlight positive stories on cultural arts and interesting people in Coronado would not have been on his radar. But this is where he ended up and he is thankful for all his life experiences, both exhilarating and painful, that led him here. Growing up in Los Angeles, he discovered Coronado’s charm when coming to visit for family gatherings at his middle sister Valerie’s home. His older sister, Pamela, and his parents subsequently moved here, and then Brad made the transition from Hong Kong in 1993, when he needed the support of his family after breaking his back.

Sporting a tweed blazer, smoking a pipe and lecturing on American Literature is the life Brad envisioned for himself all through college. His life took a different path one summer in the 1970s while driving to Alaska to make “big money” working. On a lark, he walked into the television station in Eureka, CA wearing blue jeans a flannel shirt and work boots. “It had to be one of the smallest newsrooms in the country with three people, and when the news director asked me if I was there for the job interview, I jumped at the chance,” he remembers. Having always been interested in world events, like the civil rights movement and the Vietnam war, Brad’s knowledge of current events, skills with editing and splicing 16mm film, calm demeanor and deep voice made him a shoo-in for the job. Bright and early the next day, he drove 80 miles to cover a hostage situation at a hunting lodge, and he knew then that covering the news is where he belonged. Working more than 60 hours a week, he did every job from maintaining the equipment, editing, to news anchor and director. As an investigative reporter, he pushed to make the news more serious and was rewarded when ratings skyrocketed. He then moved up in journalism to bigger markets in Sacramento, Dallas and Boston, eventually landing at NBC News in 1989, covering Latin and South America, the Persian Gulf War and surrounding crises in the Middle East. In 1992, he was posted to Hong Kong, where he covered Asia as an NBC correspondent.

Having survived many harrowing experiences in his lifetime, he vividly remembers being the only Western journalist in Soviet-occupied Afghanistan in 1986, covering the refugee camps, which housed five million out of the country’s 15 million people. “I have always had special empathy and compassion for children, and the atrocities of war show the worst side of people, but they can also highlight the best, when people come together to help the survivors,” he comments. After coming home from Afghanistan, he facilitated the airlifting of several dozen seriously war-wounded refugee children to New England for medical treatment.

After returning to Coronado, Brad had to leave his career and spent years recuperating from his back injury, feeling like he lost his identity along the way. He was also diagnosed with stage IV cancer in 2000, shortly after the birth of his son, Morgan, and was given a short life expectancy. As a way to cope and recover, he discovered alternative medicine to help detox from all his pain medication and give him a fighting chance against cancer.  Through yoga, fasting, a plant-based diet, positive outlook, and other holistic components of Ayurvedic healing, he lost 50 pounds, his back brace, and his negative attitude, as he discovered. “You are what you eat and think.” His cancer also went into full remission.

In 2013, he wrote his memoir, Warrior Pose: How Yoga (Literally) Saved my Life, highlighting his remarkable story as an NBC correspondent who overcomes many adversities through yoga and meditation, coming out on the other side to watch his son grow up and foster goodness in the world around him. Travelling around the world teaching Ayurveda and yoga, he produced several books, CDs and original music on these holistic practices. His wife Laura is a well-known Ayurveda teacher throughout the world, and sometimes Brad joins her on these ventures, but prefers to stay here in Coronado, enjoying every moment with Morgan, who is currently studying Journalism and Mass Communication, and working this summer at Outdoor Outreach, an inspiring non-profit organization that changes the lives of inner city kids. Father and son sometimes take time out of their afternoons to play corn hole in their yard. “He usually clobbers me, but time spent together is everything,” says Brad fondly.  When I asked if Morgan was following in his father’s journalistic footsteps, he said that he actually got the idea as a sophomore at Coronado High School when he joined the CTV team, and loved the hands-on learning of shooting video and being an anchorman.

I couldn’t resist asking the favorite book of such an acclaimed journalist and he highly recommended The Last Thousand: One School’s Promise in a Nation of War by Jeffrey Stern, who has become a friend. Nelson Mandela stands out as one of the most influential people he has met during his lifetime. He was amazed that Mandela didn’t have an angry bone in his body, even after spending more than two decades in prison.  He was equally impressed that Mandela was able to transform a nation by his presence.

I got to meet Bhumi, one of Brad’s newest loves, a seven month old Labradoodle, with whom he takes daily walks. Brad is now content with family time, being in two book clubs, enjoying cultural arts, walking the beach and biking around the village with his wife, and, of course, taking Bhumi to dog parks. He has recently found himself as a visual storyteller creating videos that honor art and talent for the Cultural Arts Commission, as well as producing videos for The Coronado Times, highlighting interesting and positive Coronadans like Tom Rice.

His latest endeavor is creating the Facebook group Nado Pups, which has more than 300 members since its inception a month ago. With the tagline “Be the person your dog thinks you are!”, Brad’s goal is to create a positive online community for dog owners.  Users can post photos of their dogs and learn about a variety of topics, which include dog health and nutrition, tips on calming dogs during fireworks and much more. Brad also just started working to make Coronado parks environmentally friendly for dogs and kids by advocating for the use of safe herbicides. Stay tuned as Brad continues to spread his positive outlook throughout Coronado.