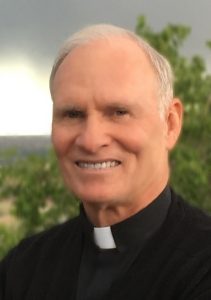 Christ Episcopal Church is pleased to announce that Rev. Michael S. Tinnon will join the parish as interim rector beginning December 1, 2019. Since 2010 he has specialized in interim ministry in Episcopal and Lutheran parishes in the dioceses of Hawaii, Colorado, and California.

Father Michael is a proud native of Lexington, Kentucky, where he attended the University of Kentucky earning his bachelor’s degree. Subsequently, he earned master of religious education and master of divinity degrees from Nazarene Theological Seminary. He earned a doctor of ministry degree from Asbury Theological Seminary with special emphasis on pastoral leadership and growth strategies for the 21st century.

In 1987 he received a presidential appointment to serve our nation’s interests as a military chaplain – first entering the United States Army Chaplain Corps, and then in 1998, he began as a chaplain in the United States Air Force. He counts it a privilege to have provided spiritual care and guidance to military service members and their families. He retired from the active duty ranks in 2010 with nearly 30 years of distinguished military service.

Father Michael is passionate about youth ministry and continues to promote the critical need to prioritize dynamic youth ministries. He is married to the Rev. Becky Tinnon; they were jointly ordained in the Episcopal Church in 2008. They have three grown children – Brad, Ashley, and John, three grandchildren and a people-loving dog named Riley.

For more information about Christ Episcopal Church go to their website at www.christchurchcoronado.org.

It's been two years since thousands of Coronado residents took part in the first-ever, centennial zip code celebration for Coronado: 92118 Day (9-21-18). This...
Read more
Business

On Friday, August 7, a special ceremony was held at Sharp Coronado Hospital to mark the 50th anniversary of the dedication of the four-story hospital tower,...
Read more
Entertainment

Twice a week, you will find Helen Kupka collecting trash left by beach-goers at Silver Strand State Beach. “I had always haphazardly picked up...
Read more

BLOOD DONORS OF ALL TYPES URGENTLY NEEDED AT THE SAN DIEGO BLOOD BANK Christ Episcopal Church will be hosting a blood drive this...
Read more

In 1983, Nancy Roberts moved to Coronado as a Navy wife, and started looking for a job during the year after the family got...
Read more

Blessing of the Pets & Stuffed Animal DriveAcknowledging the comfort and companionship they bring us. Donate a new...
Read more
Photos