Sail with the Coronado Mayor to Raise Funds for CSF

Coronado based family business, Aolani Catamaran Sailing, is hosting its first ever public event. Typically available for private charter only, the catamaran has a capacity of 48 guests and will be hosting a sail to benefit the Coronado Schools Foundation. Coronado Mayor Richard Bailey will be attending the event along with Coronado Schools Foundation members. The two hour sail will take place on Friday, October 4th from 5:30-7:30 pm and will pick up guests at the Peohe’s dock in Coronado. 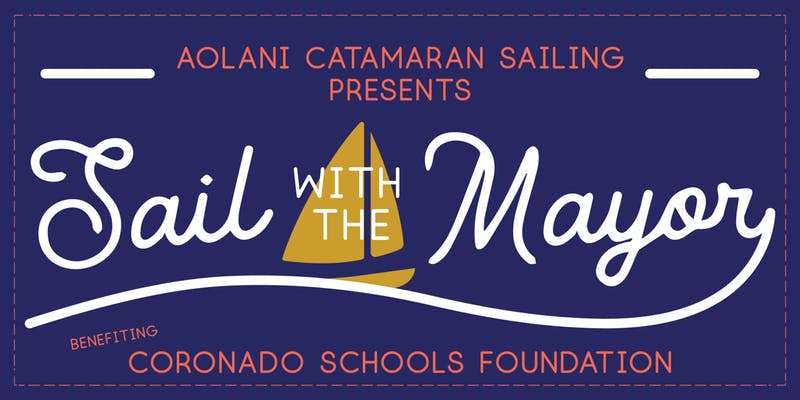 Included with the ticket are two drink tickets and appetizers by Coronado local Chef Drew of Second Nature Catering. Tickets are $110 (with discounts being offered on social media).

Aolani Catamaran Sailing is the first private charter sailing catamaran to come to San Diego, and is celebrating its 16th year in business. Long time Coronado resident Bruno Schwarz started the business in 2003. Now his two daughters, Lindsay Maphet and Shannon Lap, are both involved in the business as well. This will be Lindsay Maphet’s first public event she has hosted onboard the catamaran. Giving back to the community is very important to the company.

“The Coronado Schools Foundation is a community driven fundraising organization, which supplements state funding for two pathways in the public schools of Coronado Unified School District: STEM (Science, Technology, Engineering, & Math) and Arts. Since its founding in 1982, CSF has provided a means for parents, community members and local businesses to invest in superior public education for their children in the Coronado Unified School District. Since that time, CSF has grown into a million-dollar commitment to maintain rigorous academics and a breadth of educational experiences from kindergarten through high school.” (www.csfkids.org )

“Mayor Richard Bailey was elected to the Coronado City Council in 2012, and in 2016 at the age of 30, Richard was elected the 51st Mayor of Coronado, becoming the youngest mayor in the city’s history. As Mayor of Coronado, Richard has reduced taxes, voted against wasteful spending and supported reforms to protect taxpayers’ money which helped earn Coronado a AAA bond rating. Since being elected to the Coronado City Council in 2012, Richard has made pension reform a top priority.” (www.richardbailey.com)

Tickets can only be purchased at our Eventbrite Ticket website. You must have a ticket purchased before the event date, as we will not be selling tickets the day of the event. Link: https://www.eventbrite.com/e/sail-with-the-mayor-in-benefit-of-the-coronado-schools-foundation-tickets-68690106959

The next Dine Out! Coronado is set for this weekend, July 31-Aug. 2. All you need for your organized picnic is a takeout order...
Read more
City of Coronado

The City, the Coronado Chamber of Commerce and Coronado MainStreet hope residents join them in supporting local restaurants impacted by the ongoing pandemic by...
Read more
Business

The Brig and Port Hold Ribbon Cutting for Portside Pier

The transformation of one of Southern California’s most iconic, over-the-water restaurant complexes is complete. On Monday, July 20, 2020, the Port of San Diego...
Read more
City of Coronado

UPDATED July 17, 2020 - As of Friday, July 17, all five establishments have reopened after following all County Health procedures and protocols.On Sunday,...
Read more

Submitted by Ryan CraneIt wasn’t long after I moved to Coronado that I heard about an infamous local Facebook group. A new acquaintance of...
Read more
Community News

Coronado’s Christ Church Thrift Shop will be open outdoors on Saturday, August 8 during its usual hours of 10 AM to 1 PM. It...
Read more
City of Coronado

https://youtu.be/YIyI2Uz_Gf8The City is asking businesses to post fliers asking residents and visitors to Mask Up! Coronado. Find out more about Coronado’s ongoing campaign stressing...
Read more
Letters to the Editor

Submitted by Whitney N. Antrim Dear Friends and Neighbors,I am excited to announce my candidacy for a seat on the Coronado Unified School Board. I...
Read more
People

While the Annual Coronado Junior Woman’s Club Awards Luncheon did not take place due to COVID-19, the club would like to recognize the 2020...
Read more
Community News

According to San Diego County public health officials, six out of every 10 adult San Diegans are at extra risk for severe illness should...
Read more
Advertisement
Advertise Here (Get Rates)