CIFF and Safe Harbor Present “The Weight of Gold” from HBO 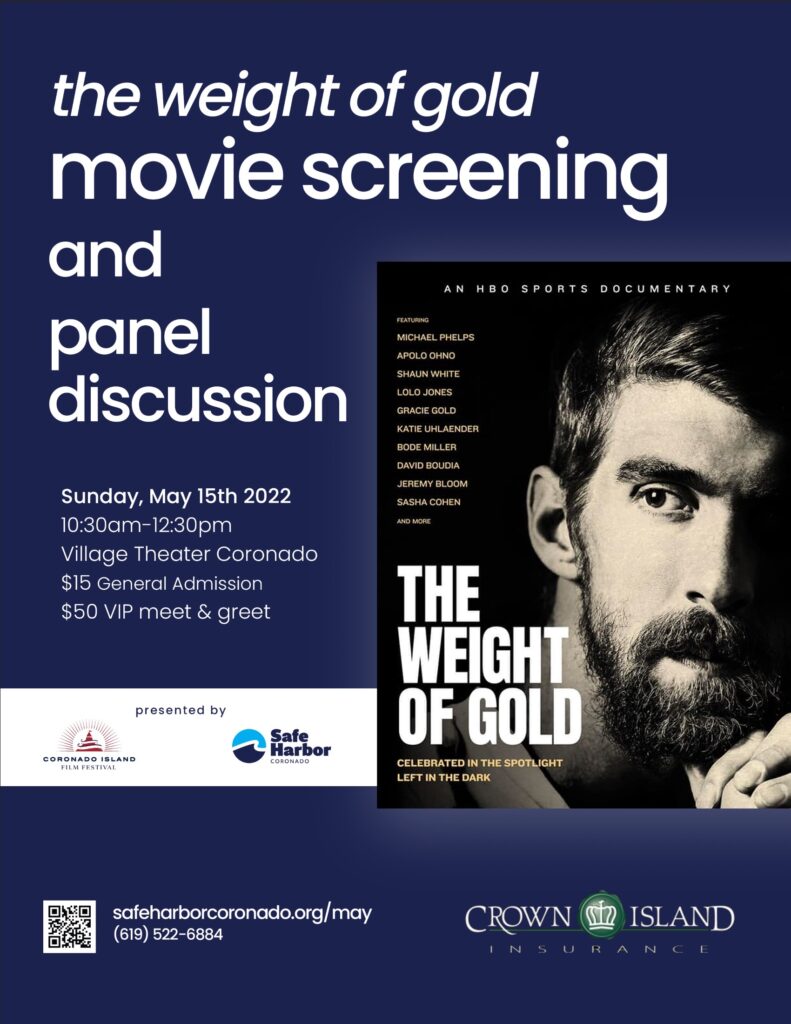 The Coronado Island Film Festival (CIFF) and Safe Harbor Coronado will host the first ever film festival screening of HBO’s The Weight of Gold, followed by a discussion with the film’s director and guest athletes.

“CIFF is proud to partner with Safe Harbor, to bring awareness of tough topics, such as depression, through film. The power of cinematic stories is the shared connection of watching someone with a similar circumstance or struggle open up, it becomes personal and cathartic,” states Merridee Book Executive Director of CIFF, “It allows for a conversation to start and hope to enter in.”

The Weight of Gold is a powerful documentary that profiles the struggles of some of the world’s strongest and most gifted athletes as they pursue the pinnacle of sports recognition – the Olympic Gold Medal. Directed and executive produced by Brett Rapkin and narrated by the most decorated Olympian of all time, Michael Phelps, the film features interviews with top Olympic athletes who open up about the crippling depression rampant among competitors, particularly after the Games are over.

“This is such a powerful film and hearing stories from athletes who are idolized in our society for their talent and achievements, sharing their struggle and vulnerabilities has a deep impact on student athletes,” says Georgia Ferrell, Director of Safe Harbor. The event is part of May’s Mental Wellness Month, a month-long campaign with dozens of activities for all ages throughout Coronado to raise awareness, remove the stigma and provide resources and tools to thrive.

Tickets are on sale now with a VIP option available, which includes athlete and Director meet + greet prior to the screening, reserved premiere seating, commemorative poster and swag (limited tickets available). All proceeds support the non-profit mission of CIFF and Safe Harbor.

Student Learning and Well Being