All Aboard: Coronado, Flagship to Celebrate New Sixth Ferry Trip

Military, locals invited to consider commuting by ferry, learn about new round trip

Commuters use a number of ways to get to work in San Diego County including by bus, trolley, train, bicycle or motorcycle. Those who live or work in Coronado have a very “island” way of commuting – via ferry boat. 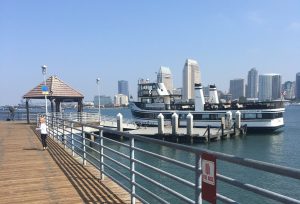 The City of Coronado and Flagship Cruises & Events invite locals, military and the commuting public to come aboard Tuesday, October 1, to learn about free commuter ferry service and an additional, recently approved, new free round trip between Coronado and San Diego. This brings to six the number of free weekday peak-hour commuter round trips aboard Flagship.

The public can help mark the occasion both on the Coronado Ferry Landing Pier at a media event and on the ferry with doughnuts, coffee and fun giveaways, such as helmets, bikes, locks and transit passes. Morning commuters are encouraged to provide feedback on the new schedule that aims to better align with connections to other forms of transit in downtown San Diego and points north. As a reminder, bikes, as always, are free.

Media events will be held at 7:10 am and at 7:50 am by the Coronado Ferry Landing Pier with leaders from Coronado, San Diego, Flagship, transit officials, representatives from the Navy, commuters and local community organizations who support alternative transportation.

“The City Council heard commuters loud and clear following a survey the City conducted in May and decided to fund a new sixth round trip,” said City Manager Blair King. “Ferry riders who took the survey said they wanted an additional trip and better connections between the ferry and other forms of transit.”

King said the City believes this low cost, reliable form of alternative transportation has been greatly improved now that morning commuters can link more easily with other forms of transit located within walking and biking distance from the ferry stop to downtown San Diego. For example, if Coronado residents need to be at work in Sorrento Valley by 8:30 am, they can catch the 6:30 or 7:10 am ferry boats, walk or bike to the Santa Fe depot in 10 minutes and connect with the 7:39 am North County Coaster train. Commuters to Coronado who start work at 7:30 am now have two schedule options, the 6:10 or 6:50 am boats, out of the Broadway terminal.

The City has a long history of ferry service going back before the opening of the San Diego-Coronado Bridge, when most everyone took the ferry to leave or reach Coronado. The City has been providing free commuter ferry service for nearly three decades.

The City supports alternative transportation and encourages commuting by bicycle, transit, rideshare and, in the summer, by using a City-funded free shuttle service because it helps reduce Coronado’s carbon footprint. The City is working to complete a Climate Action Plan to outline how Coronado is already addressing ways to reduce its greenhouse gas emissions, with efforts such as providing free commuter ferry service, and create a roadmap for future actions to reduce greenhouse gas emissions.

The fare-free commuter service is provided between Broadway Pier and Coronado in the morning and honors trips in the afternoon to the Convention Center Pier. It operates during peak commute periods, except on holidays. The City and Flagship provide roughly 150,000 round trips annually. The last time the city added a new trip in 2014, ridership increased by 50 trips per day, or 6,000 trips per year. A similar result is expected in 2019.

About Flagship Cruises & Events: Flagship’s history dates back almost as far as San Diego itself. Our family business, Flagship Cruises & Events, has been serving and entertaining San Diego since 1915. We own and operate San Diego’s largest and finest fleet, ranging from luxury yachts to the Patriot, our 2,800-horsepower jet boat, to the iconic Coronado Ferry. Our professional crew is the best in the business at providing San Diego visitors and tourists with experiences they will remember for a lifetime. Whether it is helping a child see a whale for the first time, making a couple’s magical dream wedding come true, or watching them return to celebrate their 40th anniversary under the Coronado Bridge, our team strives to treat you and everyone aboard like family. San Diego is our home and every day we look forward to sharing all its unique beauty with you. For additional info, visit: https://www.flagshipsd.com.

Eating for Your Health Never Tasted So Good

Bridge Basics and Beyond