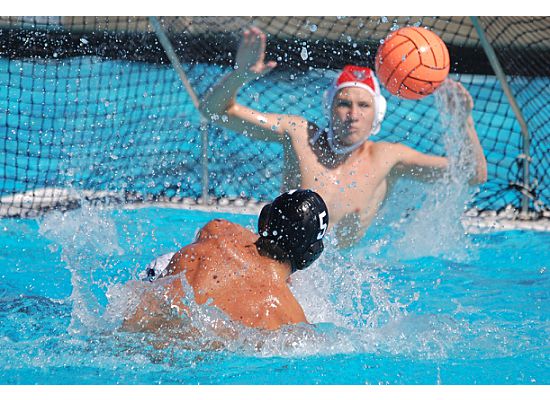 The Coronado High School boys water polo season starts this Saturday at 6pm, with a tough away match against Newport Harbor High School.

Randall Burgess, the head coach, had much to say about the upcoming season and its players. With 10 out of the 18 players being Seniors this year, including athletes like Javier Gomez, Doron Peled, Israel Dedina and Blaze LaRoe, they boast a strong starting lineup. Senior David Carol will lead the team that also includes other Senior players like Cheyne Merrill, Ryan Geer, Justin Meek, Jake Bisson, and Sam Wisotzki, who are all “working hard to get the Islanders back into the CIF finals,” according to their coach. In addition, he added that all three Varsity, Junior Varsity and Novice teams “have been very impressive in attitude, work ethic and have tremendous potential for becoming very good water polo players in the next few years.”

“This Islander team is capable with playing with almost any high school team in the country,” said Coach Burgess. “And obviously will be very competitive in San Diego. Our primary goal focuses on discovering just how good we can become over the next few months. Day to day practices must be a consistent exchange of players challenging one another, whether it is fighting for playing time or working to make teammates stronger.”

Other games to look forward to this season include their match against Huntington Beach on Saturday, September 14, at 10am, marking their first home match, and those involved in the “America’s Finest City” Invitational through September 27 – 28, showcasing 32 teams from throughout California.

Check out the rest of the boys’ schedule here!

Have you noticed the specially wrapped Free Summer Shuttle buses running up and down Orange Ave in Coronado? The Coronado Times hopped on for...
Read more
Entertainment

The Coronado Ferry Landing restarted its free Weekend Concert Series in February and has been entertaining guests with an array of local talent each...
Read more

Movie Review: “The Way Way Back” Now Playing at the Coronado Village Theatre

The Way Way Back takes its audience to places we've all been before - maybe not to Cape Cod, or the run-down water...
Read more

Over 600 Local Teens Screened for Heart Abnormalities at CHS Event

Looking through the August edition of Woman's Day this year and you can spot a piece on a woman dedicated to designing and restoring...
Read more