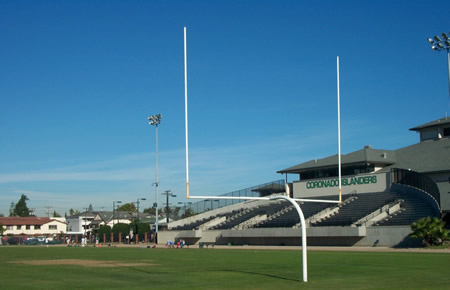 The Coronado High School Islander Football season kicks off this Friday at 7 PM with a tough game against Francis Parker.

The head coach, Tony Isabella, said a few words in regards to the upcoming game and season. “Francis Parker is a very good team, and they will be a tough opponent,” he said of the game on Friday.

He elaborated further on the rest of the season to say that fans of the Islander team should “look forward to every game because this is one of the toughest schedules in the county”. Despite the pressure, he was confident that this year would be an improvement from the last, thanks to an incredibly strong coaching staff with a mix of college experience, law enforcement and military presence, and a team of strong and intelligent athletes dedicated to the sport.

Some of the members of the team he singled out as being players to watch this season, included students Robby Weissenfels (quarterback) and Jared Meoni (linemen), this year’s senior team captains. Other strong players named were Gabe Granados (defensive back) and Francisco Jimenez (linemen).

Make sure to stop by the game this Friday at 7 PM at the CHS football field, and check out the rest of the boys’ schedule here!

The information below is provided weekly from the Coronado Police Department and then summarized for publication. Crimes Reported: Hit and Run on 8th Street and A...
Read more
Education

Due to a slowing of appointments at COVID-19 vaccination sites, the County of San Diego today expanded the category of those eligible to include...
Read more

On September 15th, all boys and girls ages 13 -1 9 are free to stop by Coronado High School and receive a cost-free...
Read more

The Smurfs have left the comfort of their mushroom homes and the small screen and have ventured, once again, into theaters. These lovable...
Read more