Master Class Series 2013: Coronado Arts Commission Presents “The Inside Story: Broadway, Film & Television from the Inside Out” 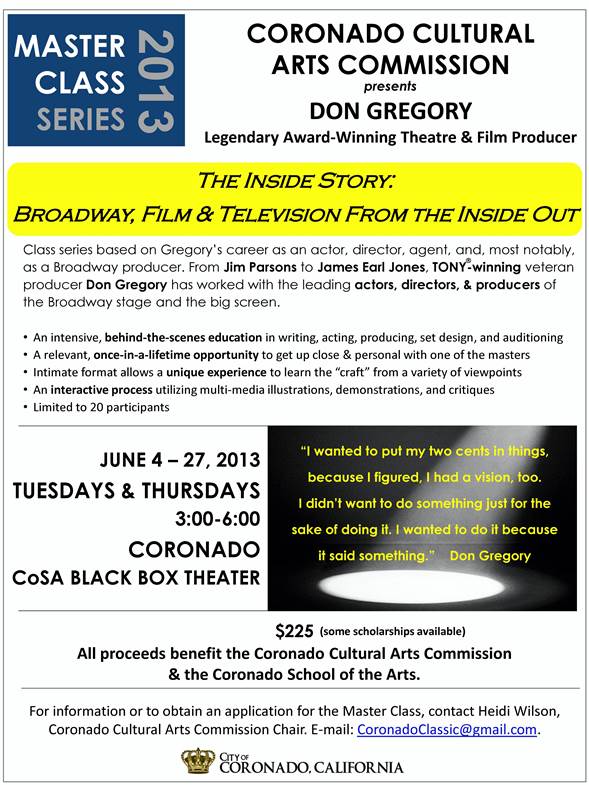 MASTER CLASS with Legendary Broadway, TV, & Motion picture Producer Don Gregory on “The Inside Story: Broadway, Film, & TV From the Inside  Out.”

And that’s just the beginning… add to that Peabody, Christopher, and Emmy-winning TV and Movie credits including features for HBO, NBC, PBS, and Hallmark plus Major National Tours for most of his stage productions plus La Cage aux Follies and it’s easy to see why this will be a truly memorable – real, relevant, and rare once-in-a-lifetime opportunity for a few committed individuals to get up close and personal with one of the masters of the game.

Limited to 20 participants, this intimate format will be an unusual, unique opportunity to learn and experience the “craft” of acting, directing, and producing as presented from a variety of viewpoints. Learning will come through an inter-active process using Gregory’s knowledge and experience; video clips and illustrations from his work in all media; demonstrations, and critiques with participants.

A sampling of areas covered:
 Putting together a show: Elements for success and differences with Stage, TV, and Motion Pictures.
 Auditions: Who looks at What  Actors, Director, Producer
 A Producer’s perspective: Actors, Directors, Set Designing, etc.
 Learning about the “rules”: representatives, unions, agents, talents & the all important-exceptions to the rule.
 Successful Marketing

A 4-week series offered from 3-6pm on Tuesdays and Thursdays beginning June 4th, 2013, in the Black Box Theatre at the Performing Arts Center at CHS in Coronado. Cost: $225 with a limited number of scholarships available. All proceeds benefit Coronado Cultural Arts Commission programs, services, and activities, and Coronado High School’s award winning Coronado School of the Arts (CoSA).

Community Grants and Housing Element options were among the critical topics discussed at the June 15, 2021 city council meeting, which started with Mayor...
Read more

CORONADO, Calif. (May 13, 2013) -- The Coronado Public Library, in cooperation with the Coronado Historical Association, has launched the Coronado PhotoAtlas. This...
Read more

Bicycle education is more than a shove down the driveway. The Coronado Optimist Club and Coronado Recreation Department along with Holland's Bike...
Read more
Uncategorized