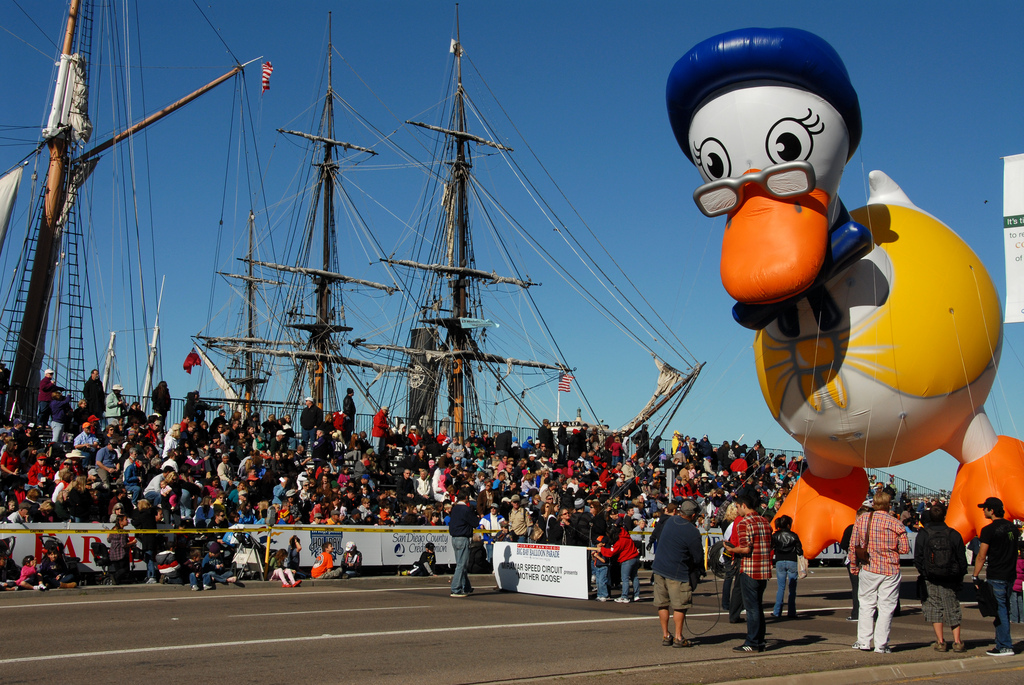 The scenic, bayside streets of downtown San Diego will come alive with the Port of San Diego Holiday Bowl Parade presented by Hilton! As always, this exciting family event brings together world-class marching bands, magnificent floats, entertaining drill teams, and a procession of enormous balloons – more than any other parade! Over 100,000 street-side spectators will enjoy the parade along with a nationwide television audience. Street side viewing of the parade is FREE!

The festivities begin at 2:45 p.m. with the National Funding 5K at the Holiday Bowl Parade. The run/walk starts at the corner of Harbor Drive and Ash Street and ends at Ruocco Park, just past the G Street Mole and the Port’s commercial fishing basin.

The parade kicks off at 3 p.m. in front of the County Administration Building on Harbor Drive, proceeds south on Harbor Drive and ends where Harbor Drive meets Pacific Highway near The Headquarters and Seaport Village. The entire parade is about two hours from start to finish.

“The Port of San Diego Holiday Bowl Parade is a signature event that our residents and visitors look forward to every year and we are proud to be the title sponsor,” said Garry Bonelli, Chairman of the Board of Port Commissioners. “The parade and the Holiday Bowl game bring thousands of visitors to our region – filling up hotel rooms, visiting local attractions. They have a tremendous economic impact.”

With more than 30 giant balloons, including the Holiday Bowl Football, the San Diego County Credit Union Sailboat, the Gingerbread Man and the Madagascar Penguins, the parade has more balloons than any other parade in the United States. This year’s theme is “Sun, Sand and Sea!” and the Grand Marshal is Jim Lazlavic, a former NFL player and beloved retired sportscaster. Lazlavic played 10 seasons in the NFL, three of which were with the San Diego Chargers.

The University of Southern California (USC) Trojan Marching Band and the University of Iowa Hawkeye Marching Band, representing the Holiday Bowl football game opponents, will perform in the parade along with several high school bands from across the United States. The parade will also feature floats and a variety of specialty units.

Parade viewing is free along the sidewalks of Harbor Drive. Grandstand seating is available in front of the Maritime Museum of San Diego. Tickets can be purchased for $22 before the parade and $25 the day of, if available, at holidaybowl.com.