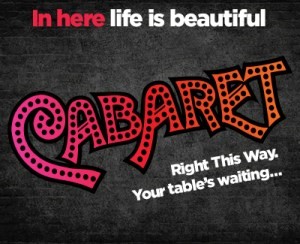 “Right This Way. You’re table’s waiting…”
“Cabaret’s unsettling conclusion reminds us not to get distracted by the song and dance and forget about what’s behind the curtain.” – The Star

Welcome to the Kit Kat Club and Berlin in the 1930s. The Nazis are rising in power and life may be uncertain, but you are invited to leave your troubles outside and join the Emcee, singer Sally Bowles and a wonderful and colorful ensemble who will tantalize and entertain you.

When Cabaret was originally produced and directed by renowned director Hal Prince in 1966 conflict in America was the central theme found in politics and society at large. Despite the Civil Rights Bill being signed in 1964, race riots and shootings of African Americans were commonplace in our country. Hal Prince was very cognizant of these events and he wanted to use the musical theatre art form to create a cautionary tale set in pre-World War II Germany to illustrate to an 1960s audience how important it is to not repeat the errors of the past. It is undeniable that this tale is still relevant today.