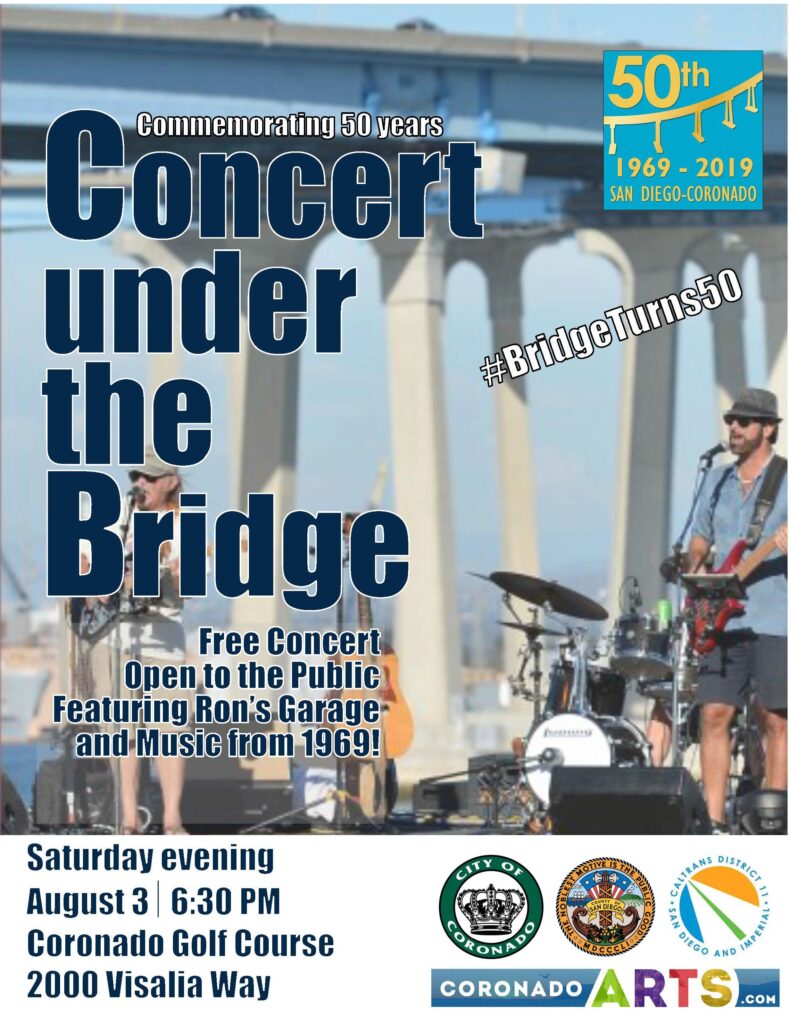 The City of Coronado, California Department of Transportation, County of San Diego and Port of San Diego will celebrate the 50th anniversary of the opening of the San Diego-Coronado Bridge this week.

Coronado will host the golden anniversary celebration on Saturday, August 3, with a community concert on the Golf Course greens on the actual anniversary of the bridge’s opening. The concert is free and open to the public. Local band “Ron’s Garage” will perform music from the 1960s from 6:30 to 8 p.m.

There will be activities for children, a VW bus-themed photo booth courtesy of Discover Coronado, booths from sponsoring agencies, and food and beverages available for purchase at the site, which is located at the new event venue along the bayside of the 3rd fairway overlooking Glorietta Bay.

Fifty years ago, the iconic San Diego landmark opened, bringing about significant transformation in Coronado and San Diego’s Barrio Logan. In the span of a few years came the Coronado Cays planned residential community, Coronado Hospital and the Coronado Shores condominium complex of 10 tall towers, and an awareness of the importance of preservation. In Barrio Logan, the bridge strengthened community pride after residents fought to create Chicano Park to protect a neighborhood and its culture.

The bridge became a major link in the region to vital military establishments as well as stunning beach-front property. For Coronado, the bridge transported residents to modern shopping malls and mega theaters. It marked the end of the ferry boat era and the beginning of Coronado as a growing resort town.

The rules for the outdoor concert are similar to the rules at the Coronado Promenade Concerts at Spreckels Park. Attendees may bring low chairs and blankets, and food and beverages. No alcohol, pop-up tents or umbrellas are permitted. Street tacos, beer and wine are available for purchase through Feast and Fareway at the venue. No dogs are allowed.