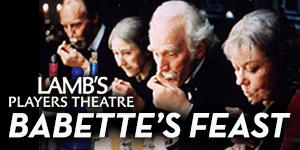 A REMARKABLE STORY OF GRATITUDE & GRACE

A gorgeous theatrical adaptation of Isak Dinesen’s remarkable short story, made famous by the Academy Award-winning film. A French cook given refuge in a rural Norwegian community finds a memorable, artistic way to show her gratitude.

Age Advisability: 10 and over

Running time: 90 minutes, with no Intermission

Encore Cafe: You are welcome to bring any beverages into the theatre as long as you get them in a cup with a dark lid from our cafe.