The Coronado Chamber of Commerce’s annual Celebrate Coronado event was held this past Thursday July 14th and over 200 people came out to show their support, making 2016 the biggest and best year yet. This community-wide celebration honored our city and all the local heroes protecting it, from firefighters and police officers to lifeguards and city employees. This year’s Islander theme paid homage to Mayor Casey Tanaka, who was also honored at the sold-out event.

“The event was everything we hoped for and more,” said Sue Gillingham, Executive Director at the Coronado Chamber of Commerce. “To see the community’s support for our local heroes was incredible.” 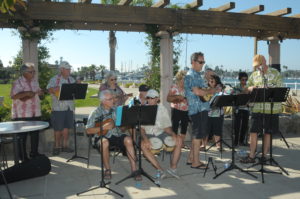 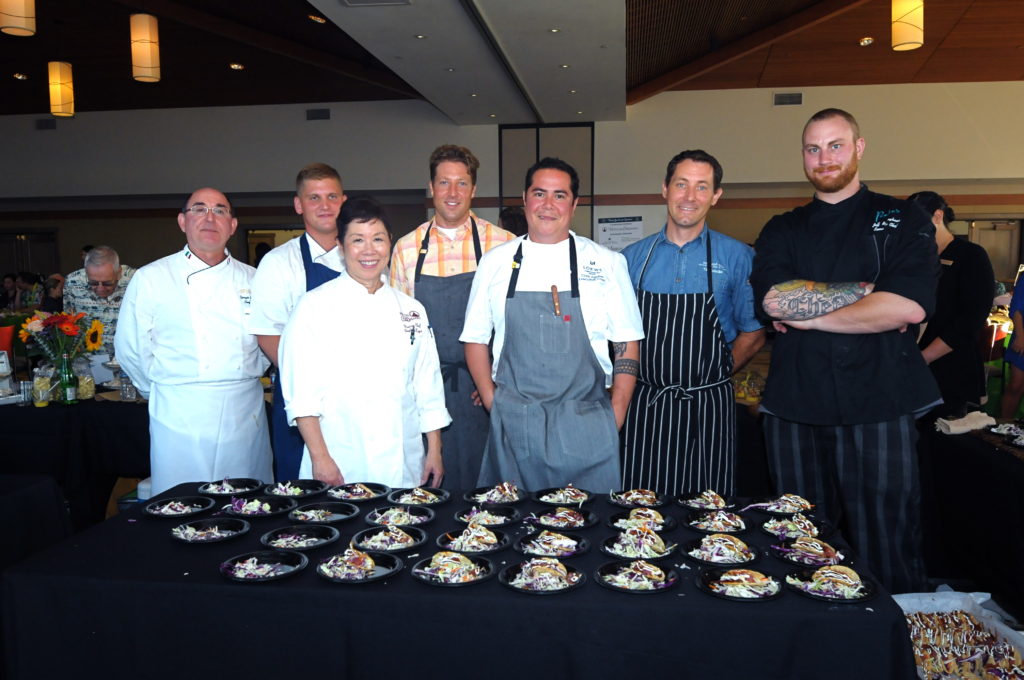 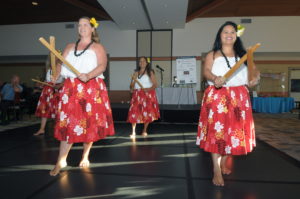 Guests were then treated to a hula performance by Ka Lei Aloha o Hula before Master of Ceremonies Greg Cox, San Diego County Supervisor, began the awards presentation. The Chamber recognized their community award winners and inducted their new Board of Directors for the 2016-2017 term, with 15 returning and three new Directors.

Officer Patrick O’Malley, who has been with the Coronado Police Department since 2003, was recognized as the Police Officer of the Year for his heroic efforts in helping not one, but two potential jumpers down off the bridge. Paramedic Brian Standing was nominated by his coworkers for Firefighter of the Year. Fire Chief Blood presented his award, applauding Standing for always going above and beyond his call of duty. 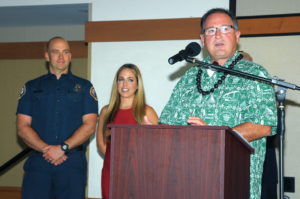 Lifeguard of the Year went to Trevor Spence, who first began his service with the City of Coronado back in 1998 as an hourly lifeguard. Spence is now one of Coronado’s full-time permanent Lifeguards, and Lifeguard Captain Sean Carey presented his award, recognizing how lucky the city of Coronado is to have Spence protecting our beaches. The Chamber introduced a new award this year, City Employee of the Year, per the request of City Manager Blair King, as a chance to recognize the men and women who work hard for the city behind the scenes. King presented this award to Rosanna Arguelles, an accountant in the Administrative Services Department. Arguelles is responsible for preparing the city’s annual budget, which is no small feat. 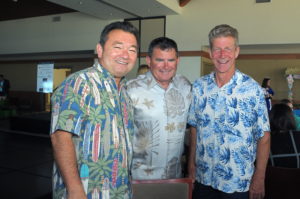 The Lewis R. Hardy, Jr. Award went to the Hotel del Coronado’s General Manager Andre Zotoff for his significant business and civic contributions. Last year’s winner Cindy Anderson presented the award to Zotoff, who received a standing ovation. While only a member of Coronado’s business community for less than four years, Zotoff’s impact has been felt in every aspect of the city’s activities. The Chamber surprised Board Member Jacques Spitzer of Raindrop Marketing with the Volunteer of the Year Award. 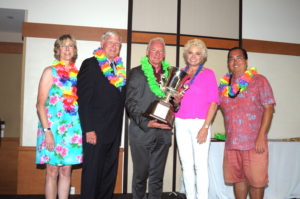 The Chamber also recognized four outgoing Board Members, Sara McClellan of Luxury Farms, Trisha Zetterberg of Art & Frames, Ruth Ann Fisher of Del Coronado Realty and Cindy Anderson of Coronado Bliss Salon, before thanking the outgoing Chairman of the Board Phil Hammett for his incredible tenure. Mayor Casey Tanaka was also thanked for his commitment to the Chamber during his term. Three new Board Members were introduced, Alexis Reitmeyer of Coronado Bliss Salon, Geoff Thorne of Higgs Fletcher & Mack and Mike Woodall of Savvy Solutions and Mike’s Island Dip, as well as new Board Chair Cindy Farless. 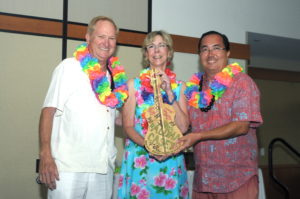 “We are looking forward to another big year,” said Cindy Farless, Board Chair. “I could not be more excited about this amazing group of Directors.”

Guests also had the chance to bid on a variety of locally sourced opportunity prizes, such as the evening’s main prize of a two-night weekend stay at the Hotel del Coronado that also includes spa treatments and brunch for two, valued at $1,500. Other prizes included a beach cruiser with an attached Polynesian coconut cup holder provided by Holland’s Bicycles, a pillow donated by Argosy Designs, a Penny Rothschild custom leather purse, a Luxury Farms gift basket and two vintage Coronado photographs donated by Gillingham that were custom framed by Art & Frames Gallery. A new addition this year was a silent auction with prizes provided by the participating restaurants.

“The event could not have happened without the support of our amazing sponsors and all the community members who helped host our heroes,” said Gillingham. “What a wonderful treat to allow the men and women who work so hard for our city to attend this event for free. After all, the event is held in their honor!”

The Chamber had a goal to allow 12 heroes to attend for free, but quickly surpassed that goal with the community’s support, sending 26 police officers, firefighters, lifeguards and city employees to the event free of charge.

The Chamber would like to give a special thanks to the Hotel del Coronado for their support as the event’s main Celebration Sponsor, as well as sponsors California America Water Company, CMG Mortgage-Kory Kavanewsky, Crestmont Property Management- Carolyn Crane, Coronado Eagle & Journal- Dean Eckenroth, Jr., Glorietta Bay Inn- Claudia Ludlow and Village Theatres- Lance Alspaugh. Another thanks goes to Bella Beverage for sponsoring the evening’s signature cocktail and to Crown City Photography for providing the evening’s photography.

Any questions or requests for further information or event photos can be directed to the Chamber staff at 619.435.9260 or info@coronadochamber.com.

Coronado restaurants have shown resiliency during these past few months of the pandemic, and continue to now as they march forward into this next...
Read more
City of Coronado

https://youtu.be/_8Hd2mm1_osWith a prohibition on indoor dining, the City is offering restaurants options to continue serving patrons. Find out about rules relaxed in May for...
Read more
Community News

Coronado residents are doing a sterling job of supporting local restaurants and cafes with takeout orders at this most crucial time, so we’d like...
Read more
Business

As we settle in for the ultimate staycation, there are a few simple ways we can make our home life that little bit cozier,...
Read more
Community News

The Coronado Chamber of Commerce is postponing the 36th Annual Salute to the Military Ball (due to be held at the Hotel Del Coronado...
Read more
Advertisement
Advertise Here (Get Rates)